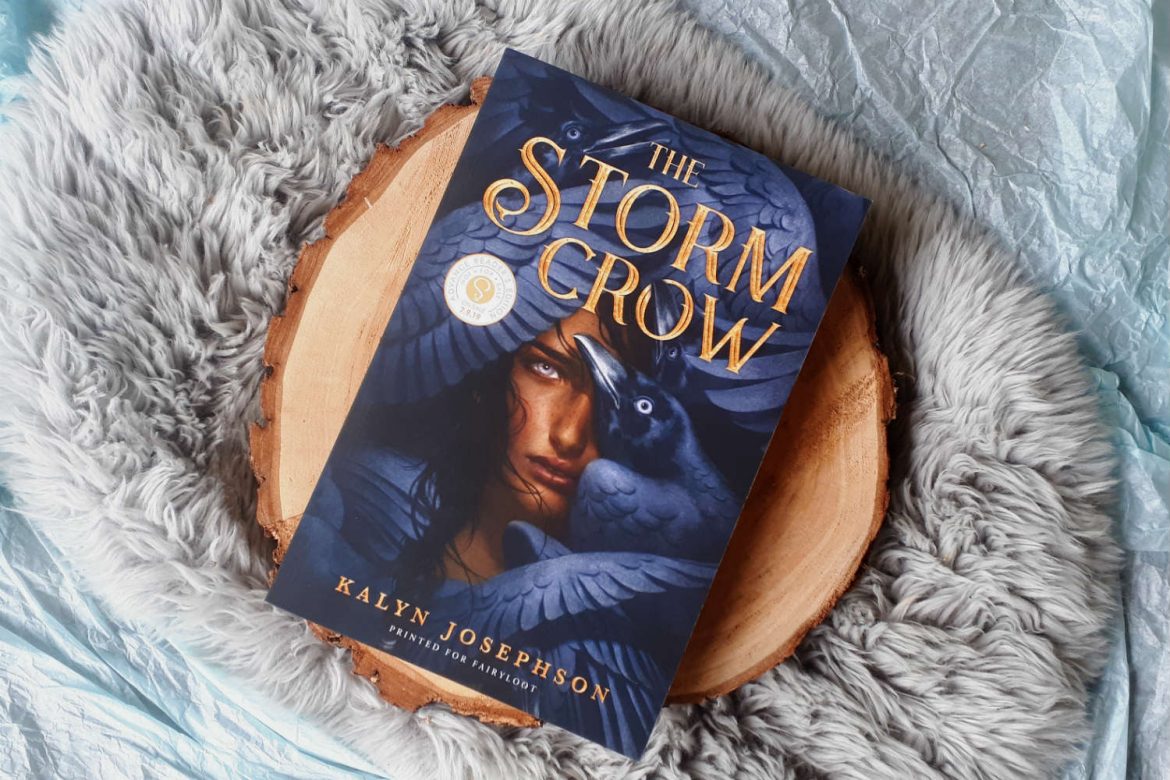 Hi everyone! It’s Friday and that means it’s time for another review! I don’t know what the weather is like where you live, but here’s it’s been raining almost all week. Not that I mind, it’s perfect reading weather. Anyway, here’s what I thought of Kalyn Josephson’s The Storm Crow!

In the kingdom of Rhodaire, magical crows play an important role in all aspects of life. But then the Illucian empire attacks and destroys everything. Including the crows. While princess Caliza runs the kingdom after her mother’s death, her sister Anthia falls into a deep depression. Then the two sisters are forced into agreeing to a marriage between Anthia and the crown prince of Illucia. This spurs her into action, and when she discovers a hidden crow egg, hope starts to grow again.

The Storm Crow was published in July, but I got an advance reader’s copy in the December 2018 Fairyloot box (and then only got around to reading it a few weeks ago, doh!). So just a quick warning: some things might have changed between the version I read and the final edition.

The Storm Crow was a fun and easy read. It was entertaining and I flew through it. There were also some great characters, including the main character, Althia (or Thia). I loved the fact that she struggled with depression, but slowly found her way out of it, with ups and downs. One of the things I like about Young Adult literature, is the attention that is paid to diversity. I mean, it seems most adult fiction is grumpy white men in mid-life crises writing about their frustration. At least Belgian/Dutch literature is.

Anyway! I was talking about diversity in YA. In most cases, this means having characters with different ethnicity or LGBTQ characters. Which is great. But disabilities, both physical and mental, deserve the same representation. So I was over the moon seeing a main character struggling with depression! And as someone with personal experience, I definitely felt her pain.

Another thing I really liked about The Storm Crow, was the female friendship. All too often, girls and women are pitted against each other in stories. The main character and the jealous rival. So it’s great to see women actually getting along and being best friends. Thank you, Kalyn Josephson!

Bit of a drag in the middle

However (oh no, here we go)… The story didn’t blow me away. It started with a bang, with the invasion and the destruction of the crows and rookeries, but then it started dragging a bit. Not that it was bad, but nothing really seemed to happen to move the plot forward. And the things that did happen, felt a bit too predictable. Except for the romance, that is. I thought I knew how that was going to unfold, but I was wrong. For now, at least. Because there’s a sequel in the works and who knows what will happen then? There is definitely some potential set-up to turn things upside down, so we’ll see!

And that brings me to my conclusion. As I mentioned, there will be a sequel, but we don’t have any details about title or publication yet. Am I going to read this sequel? Hell yeah! While The Storm Crow wasn’t a perfect book, it was still a great and fun story with great characters. And I can’t wait to see how it all unfolds!

After their mother's death when the Illucian empire invaded, Princess Anthia and her sister Princess Caliza start a rebellion to bring back the magical elemental crows that were taken from her people.