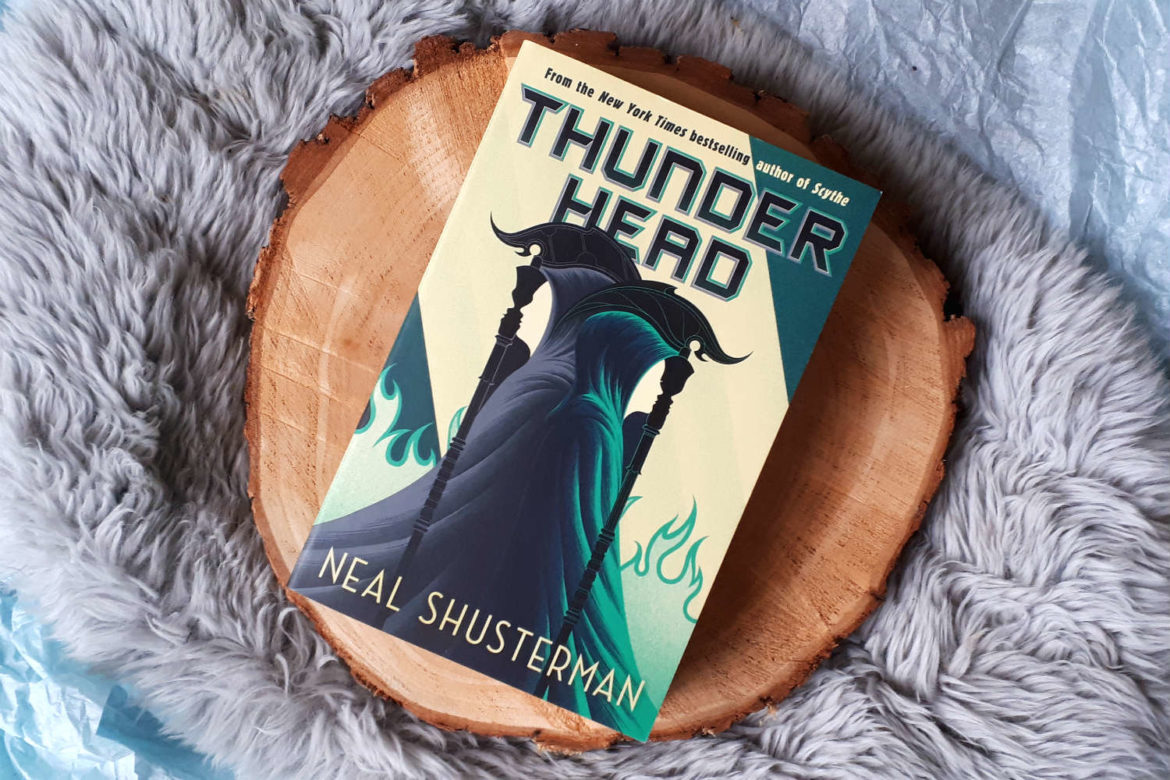 Hi everyone! How are you all doing? Last night, I finally finished my first book of the year, Children of Blood and Bone. So keep an eye on this blog in the upcoming weeks if you want to know what I thought of it. Today, I want to share my review of Neal Shusterman’s Thunderhead, the second part of the Arc of a Scythe trilogy that began with Scythe.

Warning: This review will contain spoilers for the first book in the series, Scythe. It won’t spoil events from the second book, though.

After the events in the first book, Rowan has gone rogue. He has taken it upon himself to take down unethical and corrupt scythes, under the guise of “Scythe Lucifer”. Citra is now a junior scythe under scythe Curie. She also sees the corruption and wants to change the system from the inside out. But she is thwarted at every turn, and even threatened by the “new order” scythes. Meanwhile, the Thunderhead sees everything that is going on, but is not allowed to interfere in matters of the scythedom.

Let me begin by saying that I’m glad I waited to read this until the final book in the trilogy was published. Because THAT ENDING!!! So much drama and cliffhangers! It’s just insane. And I need The Toll immediately!

Okay, now that I got that out of the way, I can calm down a bit.

While Scythe focused on Rowan and Citra, and their training, Thunderhead expands the world. It introduces more political intrigue into the story. We get tensions between the different factions, and I loved reading about that! We also get a better look into how the scythedom and the Thunderhead function. The latter happens mainly through interludes between the chapters, giving the AI the chance to give his opinion about the events.

In my review of Scythe, I mentioned that Rowan had a more interesting storyline than Citra. In this book, the focus is more on her and how she navigates the scythedom, which adds a lot of intrigue. Not that Citra takes up 75 percent of the attention, Rowan still gets plenty of “screen time”.

We also get to meet several new characters. I really liked Greyson Tolliver, but I can’t say much about his storyline because it would spoil the fun. And I also want to read more about Munira in the next book!

I loved the humour in the first book, and while Thunderhead still had some funny moments, it wasn’t as laugh-out-loud. The overall tone of this book is darker, the stakes are higher. So it only makes sense that the humour is dialed back a bit.

There is quite a lot of action in this book. Especially the finale is AMAZING! It’s heart-pounding, and will definitely make the adrenaline rush through your body as well. But along the way, there are several plot twists that will make you go “WTF????!!!”

It won’t come as a surprise that Thunderhead gets the full 5 stars from me. It’s such a fun book, despite the fact that the main characters are basically grim reapers. And now I can’t wait to get my hands on The Toll, the third and final book in this series!

A year has passed since Rowan had gone off grid, becoming an urban legend, a vigilante snuffing out corrupt scythes in a trial by fire. As Scythe Anastasia, Citra gleans with compassion and openly challenges the ideals of the 'new order.' But it is clear that not everyone is open to the change. Will the Thunderhead intervene ... or simply watch the world of Scythedom unravel?