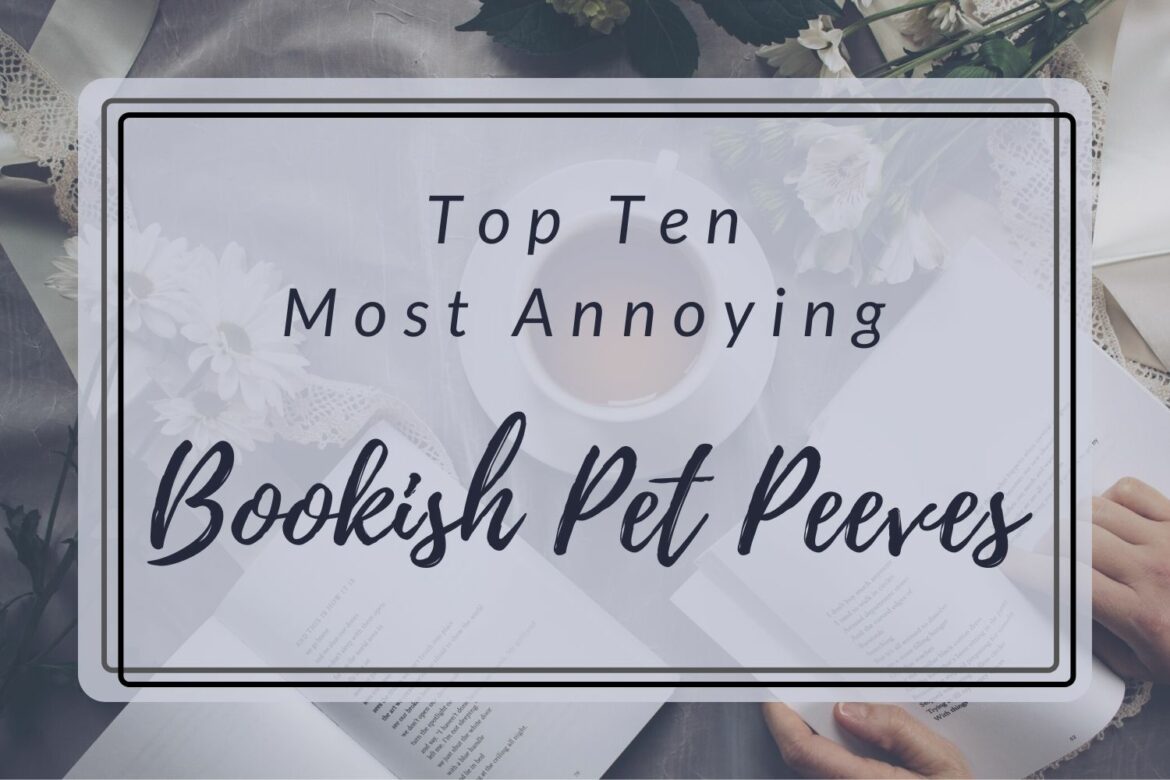 Hi everyone! It’s Tuesday and that means I’m bringing you another installment of Top Ten Tuesday, the weekly book meme hosted by That Artsy Reader Girl! This week’s prompt is “bookish pet peeves”. I actually already wrote about this topic in the past, but since it’s been a while I figured I’d make a new list and see how my opinions have changed. So without further ado, here’s my top ten of bookish pet peeves!

Yeah, this is a big one. I just absolutely hate it when the cover design/style changes midway through a series. I want my books to match and look pretty on my shelves.

This might be a silly one. But when the author’s name is printed in the bigger font, it’s like you’re trying to tell me “just buy this book because it’s by this author”, instead of trying to sell me a story or concept. I don’t know if that makes sense, but that’s the feeling I get.

I live together with a partner who is not a reader. And don’t get me wrong, he’s amazing. Except when he asks me a question in the middle of the epic finale or a steamy scene. Nothing quite ruins my immersion like hearing “Honey, do you know where I left my keys?”

Having to wait for the sequel, then not remembering what happened earlier in the story

Do you know the feeling when you read a book, then have to wait a year for the sequel… and then realize you forgot most of what happened in the first book? Please authors and publishers, add a recap at the beginning of your books!

People being snobbish about genres

There’s this idea that there’s a right and a wrong way to read. Or right and wrong books to read. And people often look down upon certain genres, like fantasy, romance, and feel-good. Puh-lease, just read whatever you fancy!

(scroll down to read on)

I don’t know if this is the case everywhere. But in my country when news media decide to make a list of “the best novels to read this holiday” (or similar), the result ends up being 80 percent male authors and 90 percent white authors. This probably also ties in with the narrow definition of “proper” literature, since most of these authors write thrillers or semi-autobiographical stories about growing up in a small village. Give me some diversity!

This is actually one of the reasons why I started reading books in English despite not being a native speaker. Sometimes, the first book in a series gets translated, but then doesn’t sell well enough to make translations of the next installments feasible. And yes, I am well aware of the fact that me reading in English doesn’t help since I’m obviously not buying the Dutch editions that way…

I know book stores have to put their price tags somewhere, but I really hate it when there’s a sticker on a book. You have to be super careful to peel it off because you don’t want to damage the book, but you don’t want to leave any residue either… AAAARGH!

Let’s be honest here, we all love pretty book covers. But for some reason, publishers sometimes PRINT “stickers” on them. You’ll have this gorgeous cover and then a bright orange circle with the words “For fans of Leigh Bardugo”. Gee, thanks…

People who return a book and it’s damaged

Don’t you just love it when you gush about a book you love, lend your copy to a friend and then get it back with dog ears or a tear? Ugh! That’s why I have trust issues!

And that’s it for this week’s list. Some of these were also on my list the previous time I tackled this topic (the stickers), but some are new (the lack of a recap). What is your biggest bookish pet peeve? Let me know in the comments below, and happy reading!