Top Ten Tuesday – Books I Enjoyed But Rarely Talk About 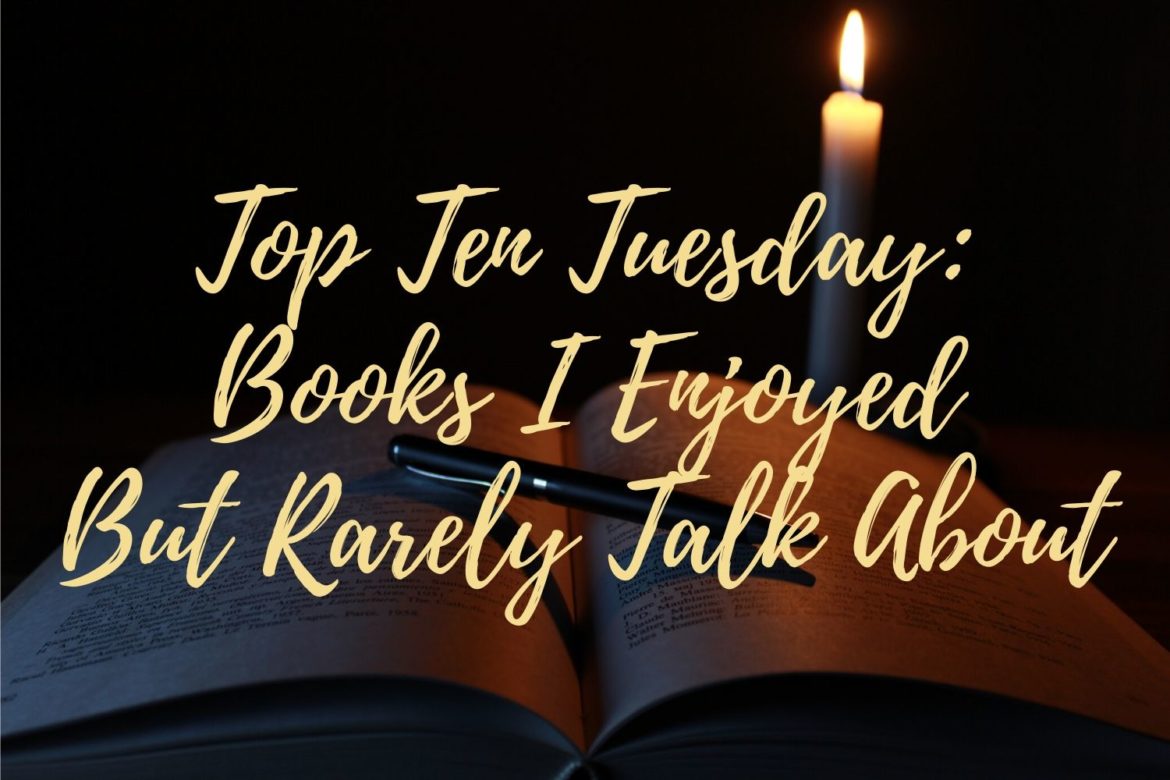 Hi everyone! I hope you can keep yourself busy in the middle of *gestures at world*. Today, I want to talk about books I enjoyed, but that I rarely mention here. It was That Artsy Reader Girl‘s prompt for this week’s Top Ten Tuesday that got me thinking about it. Below, I list 10 books I rarely talk about. Did you read any of these? Or do you have other books you enjoyed but don’t (get to) talk about much? Let me know in the comments below!

The Bird and the Blade – Megan Bannen

This book is actually inspired by an opera. It tells the story of a slave girl who decides to help the prince and his grumpy father escape. Together, they cross the Mongol empire to the capital city, where the daughter of the Great Khan requires potential suitors to solve three riddles. The prince sees this as his chance to reclaim what was taken from him. This was one of those books that I kept thinking about all day long, even when I wasn’t reading. It’s so beautiful, swoonworthy and heartbreaking.

Never judge a book by its cover. That’s a lesson I learned yet again with this book. At first, I wasn’t too fond of this cover and thought it would be some mellow sad story. But what I found was a story filled with political intrigue and plotting! It was so good and I flew through it! Although I still need to read the second part of the duology to know how it all ends!

After mandatory reading lists at school, I lost my appetite for books. But then, a few years later, I decided to pick up this book. Yeah, wonderful idea after years of not reading to start again with a massive tome, but hey! It tells the Arthurian legends from Morgaine’s point of view. This book set me on a course of reading fantasy books with female protagonists and I have barely strayed from that ever since.

We all love time-travel books, right? I probably don’t have to introduce you to Outlander. Well, Hemlock is vaguely similar in its premise. A young woman finds herself stranded in the past (or rather a parallel world). There, she meets an attractive outlaw who offers her his protection in the role of his wife. I probably don’t have to tell you how it goes from there, right?

The Lord of the Rings – J.R.R. Tolkien

Okay, this is arguably THE classic in fantasy literature, but I realized I rarely mention it here. The big Lord of the Rings hype of the movies happened right when I was in highschool, and I was obsessed! I watched the movies over and over, and read the books a couple of times. In fact, that reminds me it’s time for a re-watch!

This is another great book I rarely see mentioned. It’s about a young woman who is in prison, but is offered the position of food taster. And while Yelena plots her escape, rebellion is brewing and she herself develops magical powers she can’t control. When I look back on this one, it’s a fairly standard YA fantasy novel, but back in the day, this was one of the first such stories I read.

I used to say science-fiction is not for me. But I have come to the conclusion that I *do* like it, when it’s well written. And Skyward by Brandon Sanderson is one of those. The story kept me guessing and I love the sassy spaceship!

Flame in the Mist – Renée Ahdieh

The first book by Renée Ahdieh that I read. It tells the story of Mariko, daughter of a prominent samurai. She is sent to the palace to meet her betrothed, but her convoy is attacked by the bandits of the Black Clan. Mariko decides to disguise herself as a boy and infiltrate the Clan’s camp, to hunt the ones responsible for the attack. But in the camp, she finds herself appreciated for her abilities and intellect for the very first time… and falls in love. I mean, it’s not the most original story I’ve ever read, but it was fun and the romance was great!

The title of this series is “Gentleman Bastard” and that captures the essence perfectly. Locke is a con artist, who now has to face the mysterious Gray King who is trying to take over the underworld. It’s bloody, it’s funny, and I loved it!

Princess Thia is forced to marry the crown prince of Illucia, the empire that attacked Thia’s and destroyed their way of life. When she discovers a crow egg, the last remnant of that life, she hatches a plan to get back what was taken from her and her kingdom. I loved the way this book dealt with mental health issues, how Thia slowly crawled out of that dark place, but not without set-backs.

And that’s it for this week’s Top Ten Tuesday about books I rarely talk about. Stay safe everyone, and happy reading!