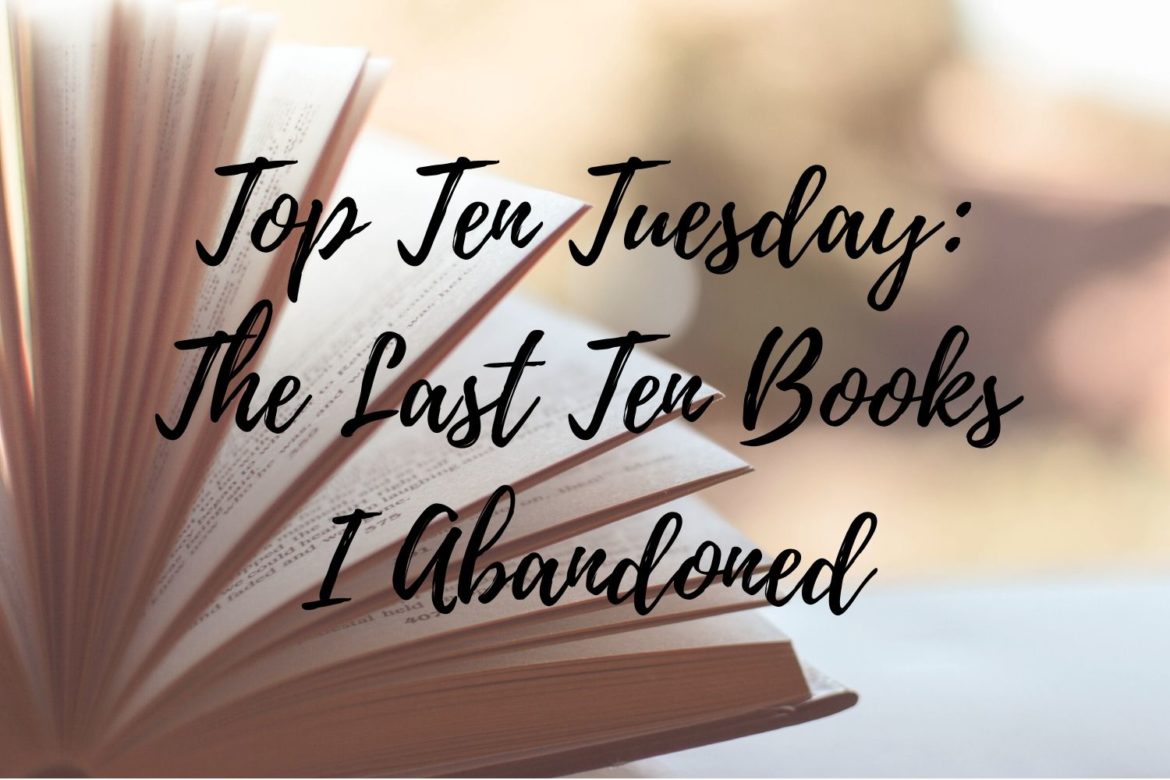 Hi everyone! How are you all doing? Last week, I skipped Top Ten Tuesday, but now I’m back with this fun weekly meme. TTT was created by The Broke and the Bookish, but two years ago, it moved over to That Artsy Reader Girl. She assigns a topic to each Tuesday and then other bloggers get to do their thing with it. This week’s prompt is “The Last Ten Books I Abandoned”. Since I have 365 books on my Goodreads TBR shelf and no hopes of ever getting to read all of them, I decided to take this opportunity to go through that list and picks ten books that are near the bottom of my virtual TBR pile. So here are 10 books I abandoned.

This is a science fiction book that asks “how far we will go to remake ourselves into the perfect human specimen and what it means to be human at all”. It’s made up of six interconnected stories that explore the possibilities of genetic manipulation, life extension, and the ethical questions these issues pose. While I love books that make you think, I’m not sure this one is for me. Six stories in a book of 384 pages? That sounds like it might all feel rushed…

Okay, so I don’t usually read YA contemporaries because I don’t like high school/teenage drama. But back when I was still active on Bookstagram, I kept seeing posts about “John Green’s amazing books”. So I added two of them to my TBR list, because I felt like I had to read his books to know what all the fuzz was about. The first was Will Grayson, Will Grayson. But I’ll be honest: there are tons of books that appeal to me more than this, so why would I ever pick this one to read?

An Abundance of Katherines – John Green

I added this to my TBR list because – as an Outlander fan – I loved the premise. Emma leaves behind everything she knows to travel to Scotland, in the hopes of finding her very own Jamie Fraser. I’m all here for cute contemporary romances and stories set in Scotland. Unfortunately, this book doesn’t get great reviews. I’ve read that the main character is waaay too naive (stupid, even) and acts like an 18-year-old while she’s 29. So if you know a book that has the same idea, but executed better, let me know!

I honestly couldn’t remember what this one is about. Apparently, it’s about a young woman – Hannah – running a bakery. When a deliveryman is found murdered behind the bakery, with the shop’s famous Chocolate Chip Crunchies scattered around him, Hannah sets out to track down the killer. This book and the rest of the series appear to be pretty popular, and while I love cozy mysteries from time to time, I… just don’t think I’ll ever get around to reading this one.

The Quiche of Death – M.C. Beaton

Yep, another cozy mystery featuring both murder and food. In this case, it’s a baking contest where one of the judges falls over dead. Now Agatha, who presented the – poisoned – quiche faces a dilemma, because she didn’t make the quiche herself. It sounds fun, but I simply prefer epic fantasy stories…

A Prisoner in Malta – Phillip DePoy

Historical fiction in which poet and playwright Christopher Marlowe is enlisted by Queen Elizabeth’s spymaster to uncover a plot against the queen. I love historical fiction that adds a twist to real events or people, but I’ve read reviews of this book and apparently it’s overly complicated at times…? Also, I don’t know enough about Marlowe or England in the late 16th-century to properly appreciate this, I fear. So out it goes.

I honestly had no idea this was on my TBR list, I can’t remember putting it on there. Nor did I have a clue what it was about until I read the synopsis for this post. That – together with the pretty average reviews it has – is a good reason to ditch it.

Another book I can’t remember anything about. The synopsis on Goodreads is pretty vague as well. Katja faces a demon and meets Serdra, a warrior woman who introduces Katja to the supernatural gifts they share. Meanwhile, an old evil stirs in Katja’s homeland, and there a Silent War, that cannot be won…? Also, this book is only 244 pages long, which doesn’t seem nearly enough to properly flesh out the world and have a story happen.

Literally the only reason I added this to my TBR list is the fact that it was written by actress Krysten Ritter (Jessica Jones) and everyone seemed to be excited about that. The story is about an environmental lawyer from Chicago who takes on a case in her hometown in Indiana. Her investigation into the town’s most high-profile company leads her to strange connections to a scandal from more than a decade ago. Contemporary thrillers are not really my thing and the premise sounds a bit cliché, so I will probably never read this.

What is the last book you abandoned? Either one you’re no longer interested in reading, or one you DNF’ed. Let me know in the comments! Oh, and if you’ve read one of the books mentioned above and you think I’m making a mistake by abandoning them, also let me know!