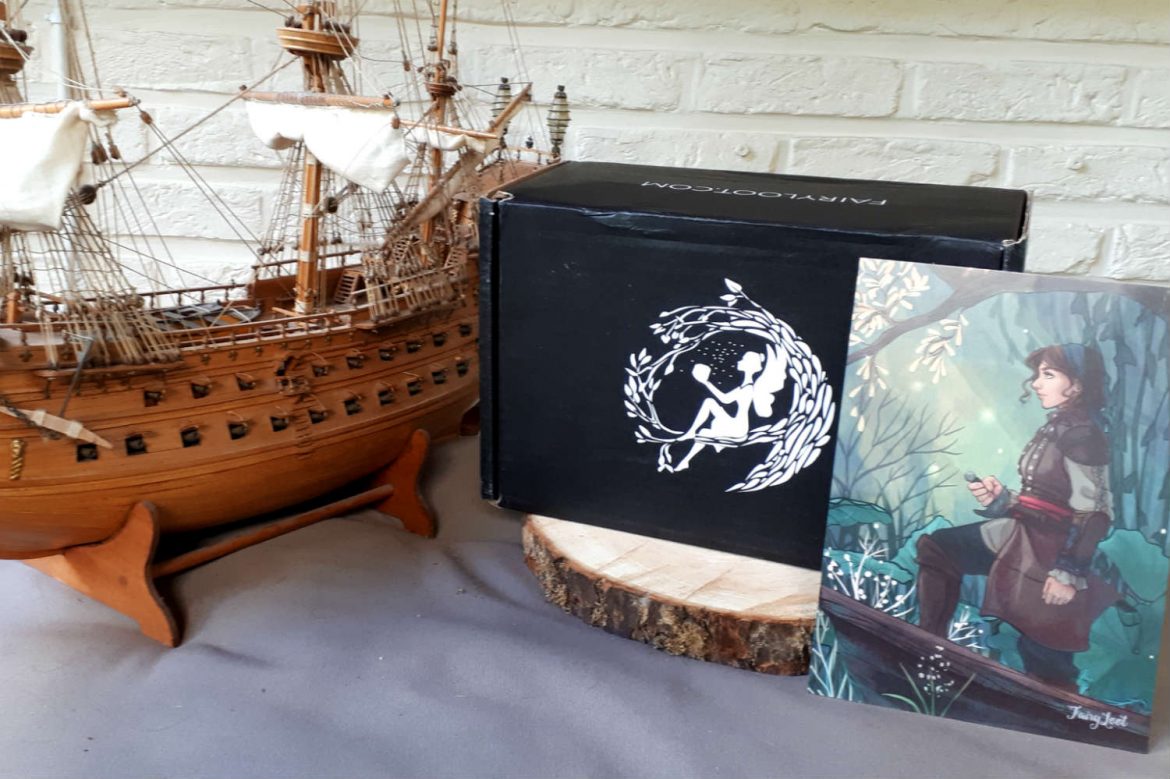 It’s the 7th day of the month and that means it’s now official okay to post the contents of my Fairyloot August 2018 box! For those of you who don’t know: they usually ship their boxes around the 20th of the month, and then do a photo challenge that starts on the 7th of the next month. And while there is in no way an embargo on posting the contents of your box, it’s generally considered polite not to do so before the start of this photo challenge, to make sure people whose box takes a long time to arrive, don’t accidentally see spoilers.

Anyway, without further ado, I present to you: Fairyloot’s August Mutinous Pirates box!

First up, we have a water bottle, designed by KDP Letters. And you know there’s only one reason why a pirate would ever drink water: because they’re out of rum. So this bottle features a quote by one of pop culture’s favourite pirates: Jack Sparrow and his “Why is the rum always gone”. I usually carry a water bottle with me, but that’s a plastic bottle I got from a vending machine that I keep reusing. Guess I’ll switch to this one from now on!

It seems like a Fairyloot box isn’t complete without a candle and this month is no exception. Nerd Poured Candles has created a candle inspired by Elian, the prince-pirate from To Kill a Kingdom. It smells like sea mist and musk, which is a manly and clean scent. I love it, but I can imagine your average pirate won’t smell as clean! Anyway, on top of the candle there are golden glitter, since Elian is prince of the very rich kingdom of Midas.

The next item is something quite unique. You know how, in movies, they write letters and then dribble some wax on the envelope to put their seal on it? Now I can do that myself! Yes, we now have our very own wax seal set! We just have to light the wax stave, dribble some wax on our letter and then press the seal (with a fierce pirate symbol) in it. I don’t write a lot of letters anymore, but I’m definitely going to try this! 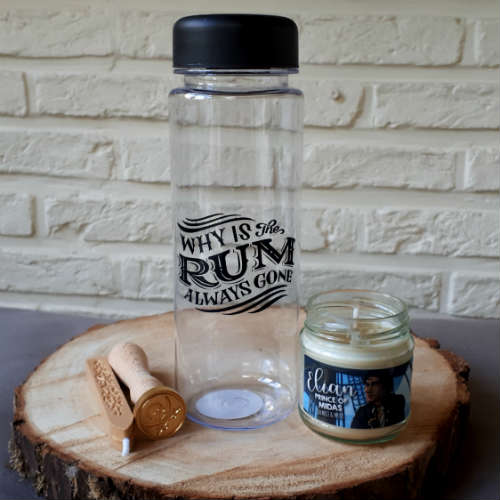 As I mentioned before, pirates aren’t exactly clean, but Geeky Clean is here to help! They’ve made a sugar scrub soap. It smells of cherry blossom and I can’t wait to try it. It’s inspired by a magical botanic plant from the featured book (more on that later) and despite the label reading “Use: dissolution of internal organs”, we are promised it won’t actually do that. But I guess that text has something to do with the book?

One of my favourite fictional pirates is Nikolai Lantsov (aka Sturmhond) from Leigh Bardugo’s Grishaverse books. He’s witty, snarky and handsome, what more do you want, am I right? So when I found this next item, I was over the moon. It’s a hanging flag, designed by Reverie and Ink, and it reads “When people say impossible, they usually mean improbable”, one of Nikolai’s most famous quotes. As you might have spotted with your eagle eyes, the word “usually” is misspelled on this flag. I hadn’t actually noticed it at first, but Fairyloot sent everyone an email to apologise and to tell us we would get a replacement item in the near future. Which is great customer service, so a round of applause to the Fairyloot team!

The final item before we get to the featured book and matching swag, is a magnet. It’s designed by Miss Phi and features a quote from Daughter of the Pirate King (which I keep seeing everywhere, but I haven’t read it yet). It reads “Oh the ridiculous things one as to do when one is a pirate”. It sounds like there might be quite a story behind this quote. And it’s such a cute magnet to put on my freezer! 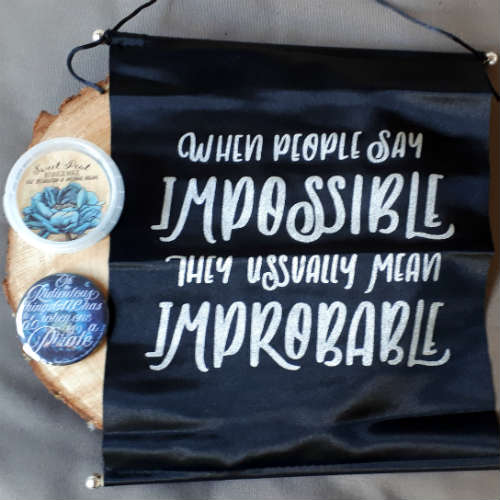 Speaking of Nikolai, next year will see the release of King of Scars, a spinoff of the Grisha trilogy with our dashing pirate/prince as the main character. To get us excited about that (hah, as if we needed to be more excited!) we received an exclusive sampler. It’s just a tiny preview, but I already have so many questions and feelings! Oh, and I almost forgot: the back of the sampler is a gorgeous poster!

There was also a promotional card for a set of classics with matching covers. Don’t these books look absolutely stunning?! 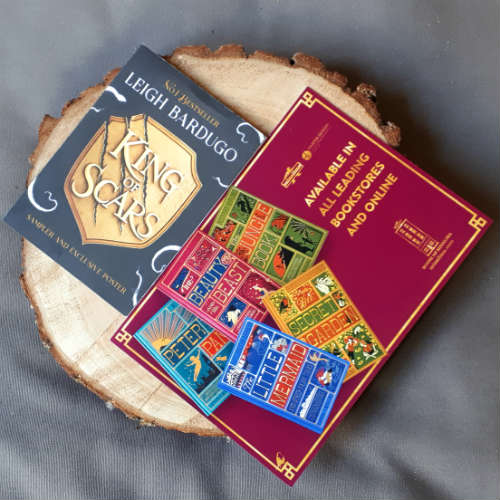 So what’s the book of the month, you ask impatiently? It’s… These Rebel Waves by Sara Raasch. It tells the story a soldier, a pirate and a heretic. When a diplomate is abducted, they have to decide how far they are prepared to go. It’s inspired by the Spanish Inquisition, has pirates, (botanical) magic, adventure and mutiny. And let me tell you, I am hugely excited to read this one! Let’s also take the time to admire this gorgeous cover! And you can’t see it on this photo, but the book has green sprayed edges. Furthermore, this book is actually signed by the author!

With the book came the traditional letter from the author with on the backside artwork featuring the main characters, a card detailing the magic properties of 2 plants, the Fairyscoop newsletter, bookmark with this month’s artwork and the buddy hashtag card. 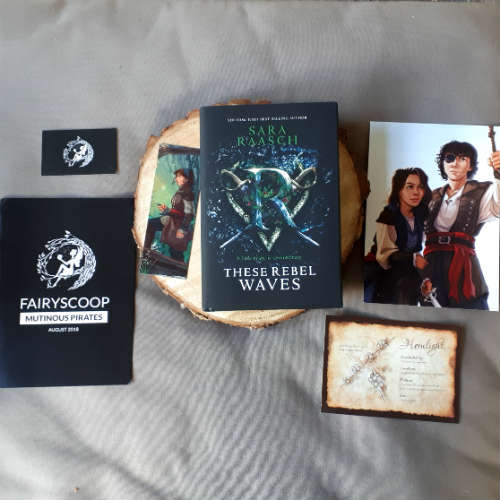 I’m writing this unboxing on my bed, surrounded by all the items. And I can guarantee you: there’s not much space left here. It’s just so much. Seriously, how do they manage to get this all into that box? And it’s not just the quantity of course, the quality of these Fairyloot boxes keeps surprising me as well. This might just be my favourite box of them ever. Or well, so far, because I’m sure they’ll outdo themselves once again in the near future!

What was your favourite item in the Fairyloot August 2018 box? Let me know in the comments! 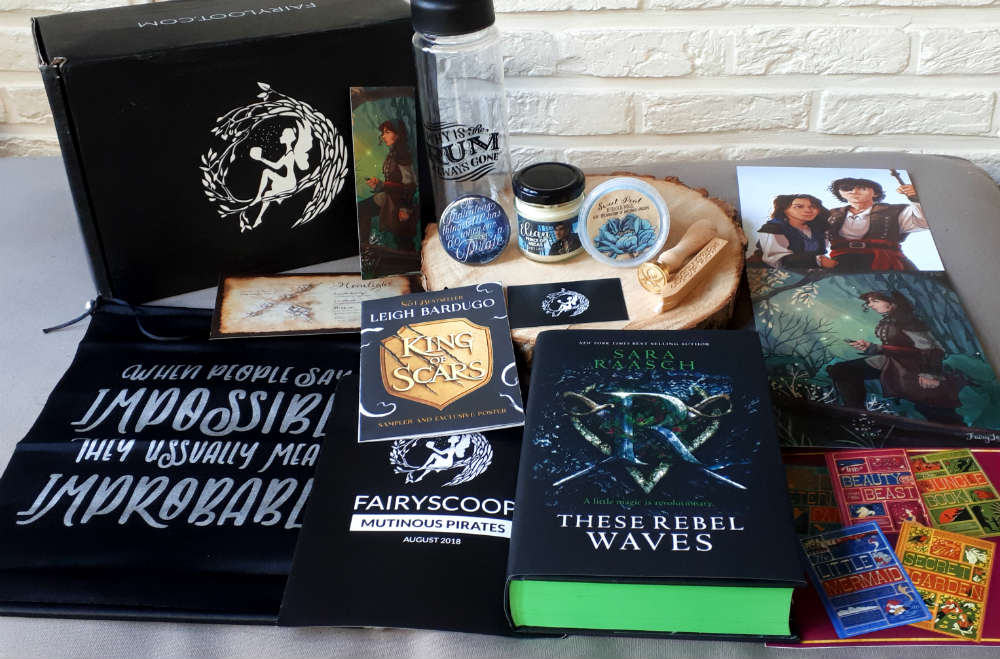