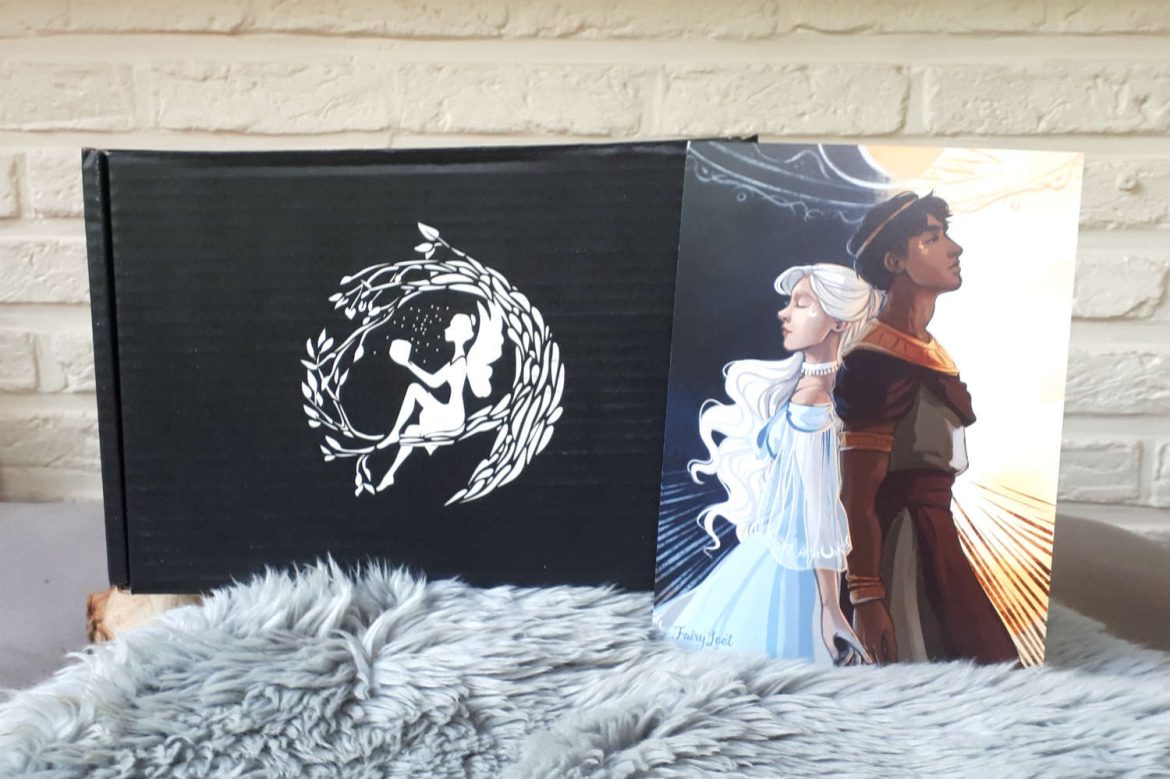 I want to begin this blog by apologizing for not posting on Tuesday this week. But I’ve been sick and my overall health isn’t what it should be (nothing to worry about though, just very tired and stuff), so I’m thinking of cutting back to one post per week instead of two. Not sure if that’s definitely going to be the case, but yeah, just wanted to let you guys know. Anyway! I still owe you an unboxing of the Fairyloot September 2018 box! The theme was “Starcrossed swoons”, and aren’t those our favourite kind of swoons?! So let’s get started, because this box was STUFFED!

First up, we have a scented candle inspired by Twilight’s Bella and Edward. I have to confess I have never read the books or seen the movies, because from what I heard, I would just be annoyed by the two protagonists. That being said, this candle by Nerd Poured Candles smells great! It’s crisp apple, pine and cedarwood, making it a perfect combination for this time of the year, if you ask me. And it comes with gorgeous grey and red glitter!

Once the Twilight hype was over, everyone seemed to move on to Sarah J. Maas’ books. And I can’t think of any series that has more starcrossed lovers than A Court of Thorns and Roses. So these shoelaces with symbols representing the seven courts of Prythian – designed by Fictiontea Designs – are a perfect addition to the box. And it never hurts to have an extra pair of shoelaces in case of emergency, right? 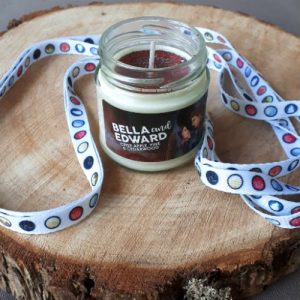 The next item is a notebook inspired by The Star-Touched Queen and designed by Read At Midnight. I haven’t read this book yet and I don’t know anything about it. But the quote on the cover reads “No matter where we are, we’ll always share the same sky, we’ll always be guided by the same constellation”. I don’t know about you, but that definitely sounds like something starcrossed lovers would say.

Up next we have a really amazing and unique item: … *drumroll*… an apron! This is seriously so great! It’s designed by Literary Life Co and features a quote from Strange the Dreamer. It reads “Dream up something wild and improbable. Something beautiful and full of monsters”. It’s absolutely stunning and I don’t want to use this apron in case it gets dirty. Which is the point of an apron, I know, but still…! 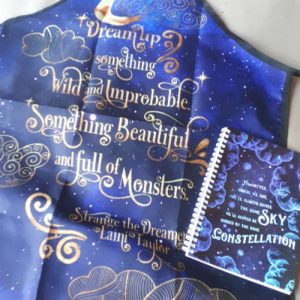 The following two items are both designed by Fictiontea Designs and inspired by Cassandra Clare’s Shadowhunter world. The first one is an enamel pin with a Shadowhunter rune symbolizing love. I don’t really use pins to be honest, but this one looks beautiful, especially with the glitter! The other item is a box of matches. They’re described as “Angelic Fire” matches although I have to confess I have no idea what that means (unpopular opinion: not a fan of the books). Interestingly, they’re quite long and have a purple tip. 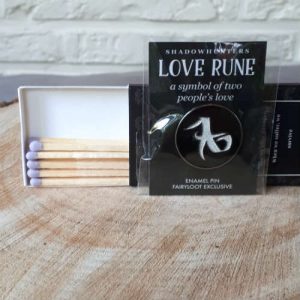 Winter is coming and that means our skin could use some extra love. So this tin of cocoa and shea butter is most welcome. It’s created by Little Heart Gifts and is inspired by Mal and Alina from the Grisha trilogy (not my favourite ship in that story though, Nikolai was waaaaay better… Anyway!). It smells like stargazer lily, in other words: delicious! 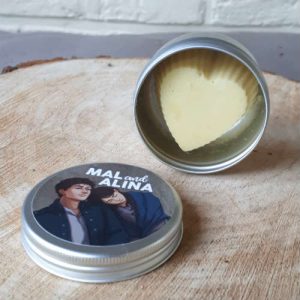 Then there’s a set of postcards featuring swoonworthy couples. These are all designed by Taratjah, the wonderful artist who also creates Fairyloot’s monthly artwork. We have Julian and Emma (The Dark Artifices), Rhysand and Feyre (A Court of Thorns and Roses), Cassian and Nesta (A Court of Thorns and Roses), Amar and Maya (The Star-Touched Queen) and Lazlo and Sarai (Strange the Dreamer). As you might have noticed, these are all couples from books/series that have other items in this box as well. These cards are all absolutely gorgeouos, so I’m currently looking for a place to put them on display. 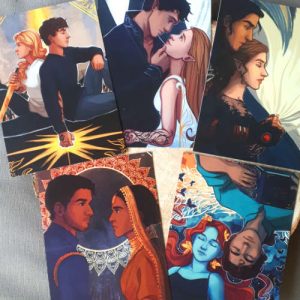 Before we move on to the book of the month, there are a few bonus items. There’s a sampler for Queen of Air and Darkness, the third book in the Dark Artifices series by Cassandra Clare, which will be released later this year. We also got a postcard of Muse of Nightmares, the recently published sequel to Strange the Dreamer by Laini Taylor. There’s also a bookmark for Tempest and Slaughter, the latest book by Tamora Pierce. It’s just not any bookmark, it’s shaped like a feather! And finally we have all the usual stuff: the spoiler card with artwork by Taratjah, the bookmark with matching artwork, the Fairyscoop newsletter and the buddycode. 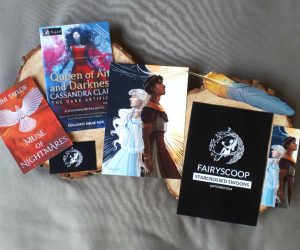 The book of the month

So now the moment you’ve all been waiting for: the book of the month! It’s Mirage by Somaiya Daud and I’m so frigging excited to read this one! First of all, let’s admire this gorgeous cover (a Fairyloot exclusive, the standard edition is purple) and the sprayed edges. I’m a sucker for sprayed edges and these are such a beautiful shade of purple which matches the naked cover underneath the dust jacket. To make it even better: this book is signed by the author!

What is it about, you ask? Well, it’s a fantasy story set in a star system far, far away. Sixteen-year old Amani is kidnapped and taken to the royal palace, where she has to act as a body double for the cruel and hated princess Maram. Luckily, there’s the princess’ fiancé Idris… As you know, I love palace intrigue, so I have incredibly high expectations for this book! 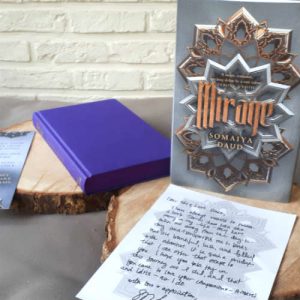 Whew, this turned out to be a longer post than I anticipated, but there were just so many goodies in the Fairyloot September 2018 box! It’s hard to pick a favourite item, but I think I’ll go with the apron. Or the book. What’s your favourite? Let me know in the comments! 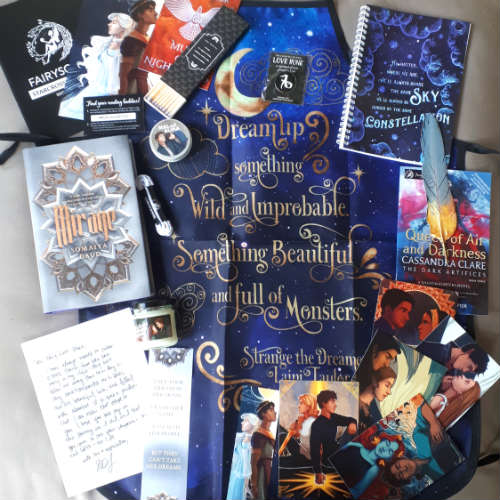