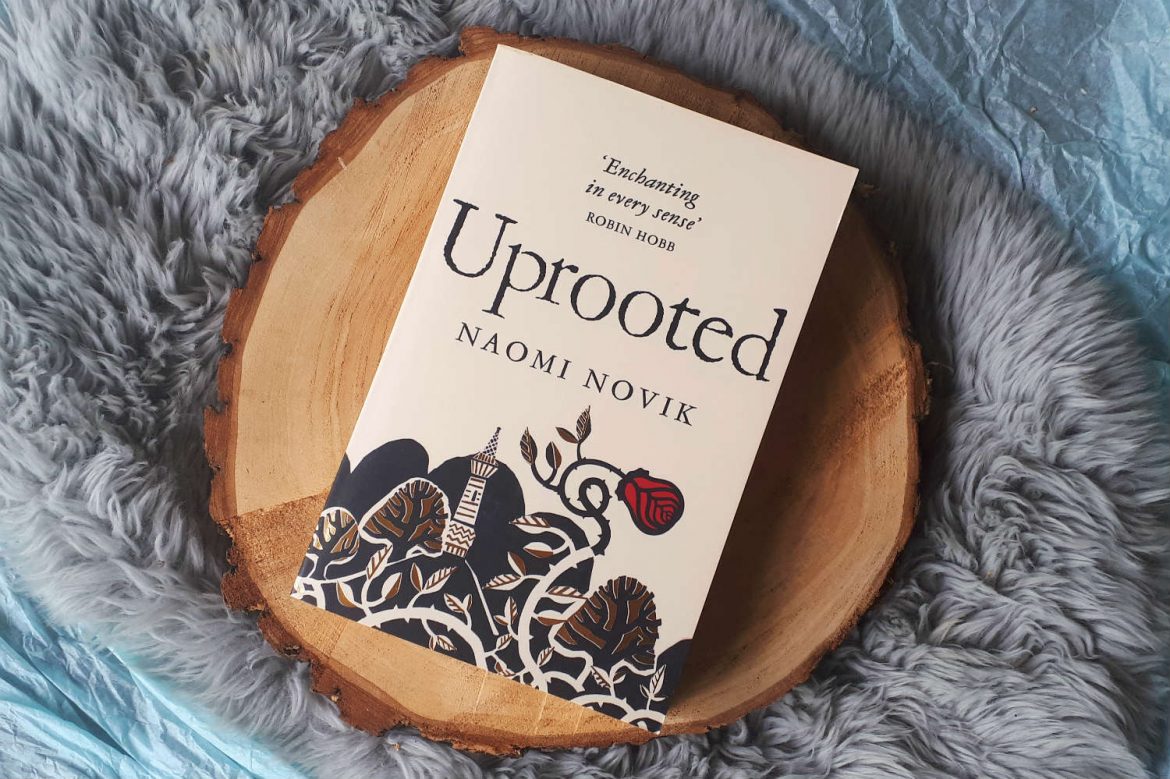 Hi everyone! How are you doing? Today I bring you a new book review, of a story inspired by Eastern European folklore. Did Uprooted by Naomi Novik manage to enchant me? Here’s what I thought of it!

Agnieszka lives with her family in a small village near the Wood, a dangerous forest that sometimes attacks people. Every 10 years, the Dragon (not an actual dragon, but a grumpy wizard!) descends from his Tower to the valley, where he chooses one girl to live with him and serve him. Everyone knows Agnieszka’s best friend Kasia will be the one this time around. But when the Dragon announces his choice, it’s not Kasia but Agnieszka.

Uprooted is sort of a dark and twisted fairytale and I’m all here for that! So you can imagine I enjoyed this book a lot. The Wood is genuinely creepy and I loved the atmosphere of this story so much.

Wizard in the tower

The plot of a young woman having to move in with a grumpy wizard to act as his servant isn’t exactly new. Master of Crows, which I read last year, immediately popped into my mind. But Uprooted focuses less on the romance between these two characters. In fact, Agnieszka and the Dragon don’t spend an awful lot of time together “on screen”. I would have liked to see more of their interactions, both to watch their relationship develop a bit more clearly and to flesh out the Dragon’s personality. Now he was a grumpy wizard at the start and that didn’t really change throughout the story…

Instead, we get a strong focus on the friendship between Agnieszka and Kasia, who became such an interesting character. I loved how these two characters clearly love each other dearly, yet there is also some underlying tension that gets explored during one scene in particular (which I can’t talk about because spoilers).

Agnieszka herself does suffer from Special Snowflake Syndrome, but she was never unlikeable. I did have some problems with a certain side character, who first did something very asshole-y, but later on in the story we apparently were supposed to sympathize with him…? Not over his asshole-y behaviour, but over something else. But I just couldn’t, and hated him throughout the book…

Finally, I also would have liked more dialogue. Now it was often page after page of description, and barely a line of dialogue. I don’t need endless conversations on every page, but now the lack of them really stood out. Even when Agnieszka had a question, she didn’t ask it loud on the page, but instead it went like this (this is not a literal quote, but it’s the structure that was used a number of times):

Agnieszka wondered what time it was. “Just before noon”, the Dragon replied.

Why not have her ask the question? Now it seems like the other characters could read her mind or something. That was a bit confusing to me at first.

So all in all, Uprooted was a charming story with a great atmosphere. It isn’t without its flaws, but if you’re in the mood for a fairytale inspired by folklore and with a great female friendship, this is the book for you!

“Our Dragon doesn’t eat the girls he takes, no matter what stories they tell outside our valley. We hear them sometimes, from travelers passing through. They talk as though we were doing human sacrifice, and he were a real dragon. Of course that’s not true: he may be a wizard and immortal, but he’s still a man, and our fathers would band together and kill him if he wanted to eat one of us every ten years. He protects us against the Wood, and we’re grateful, but not that grateful.”

Agnieszka loves her valley home, her quiet village, the forests and the bright shining river. But the corrupted Wood stands on the border, full of malevolent power, and its shadow lies over her life.

Her people rely on the cold, driven wizard known only as the Dragon to keep its powers at bay. But he demands a terrible price for his help: one young woman handed over to serve him for ten years, a fate almost as terrible as falling to the Wood.

But Agnieszka fears the wrong things. For when the Dragon comes, it is not Kasia he will choose.