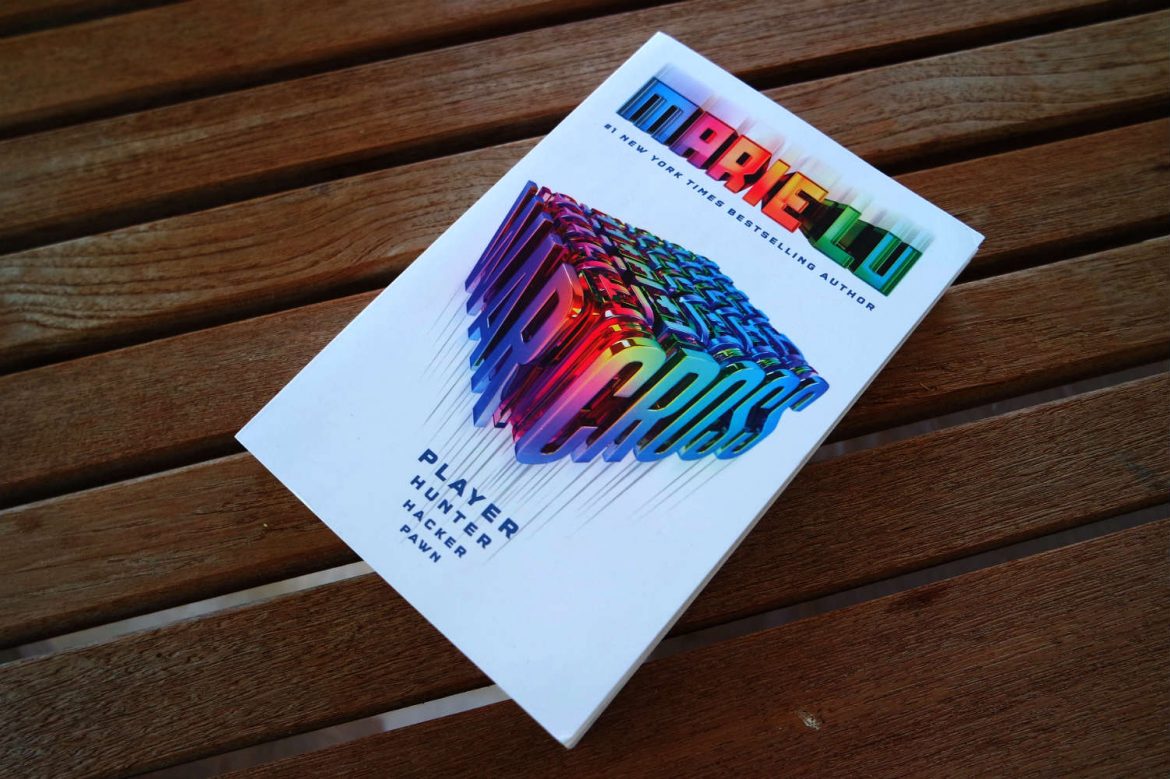 When the most popular game in the world is facing a security problem, the creator of Warcross decides to hire a young bounty hunter to uncover the threat. But Emika gets more than she bargained for.

As a fan of MMORPGs I was intrigued by the premise of Warcross: a bounty hunter who glitches into the game and draws the attention of the entire world… and the game’s creator. Emika Chen is then hired by billionaire Hideo Tanaka to uncover a security problem. She is entered into the international Warcross championship and finds herself in a world of fame, fortune and intrigue.

I loved the idea of this huge computer game and a worldwide tournament. The game itself sounds really awesome and Marie Lu wrote great action scenes. But as a gamer, I felt a bit let down, to be honest. We only got 1 regular game in the entire book and at times I was confused about how Warcross works. It’s more than just a game, there’s an entire virtual world surrounding it. But we don’t get an awful lot of information about what this virtual world is and isn’t.

What we did get, was a wonderful amount of diversity. Big round of applause to Marie Lu for that! Because Warcross is an international sensation, we have people from all over the world playing it. The main character is Chinese American, the game’s creator is Japanese, we have people with Latino and Arab backgrounds,… There is also a gay (ex-)couple and an important character who’s in a wheelchair.

The main character, Emika, was okay. She wasn’t annoying (which is an achievement, sometimes main characters in YA are just so irritating, seriously), but she didn’t really stand out either. If I had to describe her, I would say “she has rainbow hair and tattoos… and erm… dunno?” It’s hard to miss the rainbow hair, since we keep getting reminders about this. Yes Emi, we know!

Because she doesn’t have outspoken character traits, it’s hard to understand why Hideo falls in love with her. Oh yes, there’s romance in this book! The romance itself is decent to good (the hot spring!), but because our main character is so bland, I can’t really understand why he fell for her. Is it the rainbow hair…?

The story itself was rather predictable. There was a big twist in the end that I saw coming from miles away. It does create an interesting starting point for the sequel, but it didn’t leave me shocked. However! Just before that twist, there was another one that did surprise me. I can’t say too much about that one, but I’m looking forward to fascinating moral issues in the 2nd book.

All in all, I wanted to give this book 3,5 stars out of 5. But that’s impossible, so I decided to round it up to 4 because of the hilarious Leeroy Jenkins reference. Which totally gave me a reason to show you all that video, in case you don’t know the legendary Leeroy.

For the millions who log in every day, Warcross isn’t just a game—it’s a way of life. The obsession started ten years ago and its fan base now spans the globe, some eager to escape from reality and others hoping to make a profit. Struggling to make ends meet, teenage hacker Emika Chen works as a bounty hunter, tracking down players who bet on the game illegally. But the bounty hunting world is a competitive one, and survival has not been easy. Needing to make some quick cash, Emika takes a risk and hacks into the opening game of the international Warcross Championships—only to accidentally glitch herself into the action and become an overnight sensation.

Convinced she’s going to be arrested, Emika is shocked when instead she gets a call from the game’s creator, the elusive young billionaire Hideo Tanaka, with an irresistible offer. He needs a spy on the inside of this year’s tournament in order to uncover a security problem . . . and he wants Emika for the job. With no time to lose, Emika’s whisked off to Tokyo and thrust into a world of fame and fortune that she’s only dreamed of. But soon her investigation uncovers a sinister plot, with major consequences for the entire Warcross empire.