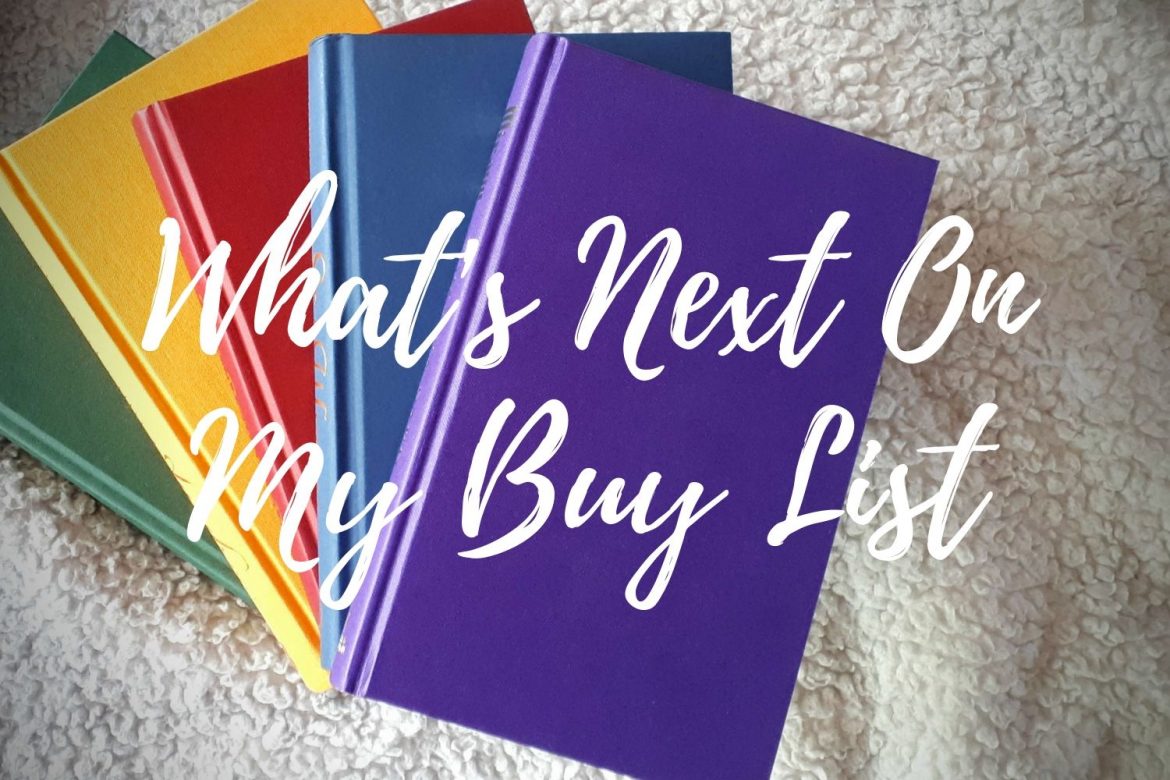 How many unread books do you have on your shelves? At the moment, I’m at 13. But at the beginning of the year, that number was waaaay higher. I think it was about 30 books, thanks to a gift card and holiday presents. Add the monthly Fairyloot boxes that include one, or sometimes two, book(s). And you see that I have a lot of catching up to do. So I put myself on a book buying ban at the start of the year. But by now, I am starting to look forward to being able to buy new books. So let’s take a look at the books at the top of my buy list!

These are the second and third part in the Arc of a Scythe series by Neal Shusterman. I recently read the first book, Scythe, and loved it (review coming soon, by the way)! In this series, society has conquered death. People don’t die from old age, diseases or accidents anymore. No, only Scythes (designated grim reapers) can “glean” people. This is a fascinating world with two young apprentices dealing with the burden of their new profession, and it poses intriguing questions about the meaning of life. But don’t worry, it’s not as grim as it sounds, there are moments of humour as well!

Another set of sequels, this time to Illuminae by Amie Kaufman and Jay Kristoff. In Illuminae, we met the inhabitants of a remote planet that was destroyed by an evil consortium. But just when they think they’re safely on board of an evacuation fleet, they discover their problems are in fact only getting started: a deadly plague, an AI that’s gone haywire, and an enemy spaceship in hot pursuit. I loved the unique structure of Illuminae, which was written as a collection of interviews, diary entries and data logs. So I can’t wait to get my hands on these two follow-up books.

A Darker Shade of Magic

If you ask people who their favourite scifi or fantasy writer is, it’s quite likely they might say Victoria/V.E. Schwab. She has written a number of popular novels and I see people gushing about them all the time. But I haven’t read any of her books yet… (Curse you, buying ban!) A Darker Shade of Magic tells the story of Kell, a magician with the power to travel between parallel Londons (grey, white, red and, once upon a time, black). Then he meets a cut-purse in Grey London, and soon treachery lurks at every turn and they have to work together to save the world… if they can stay alive long enough to do so.

I already listed science fiction by Amie Kaufman and Jay Kristoff earlier in this post, but there’s no such thing as too much of it. So that’s why I’m also adding Aurora Rising to my list. But there’s no need to read the Illuminae series first before picking up this one. It’s set in a completely new universe. In Aurora Rising, Tyler Jones – the star pupil of Aurora Academy – gets stuck with a crew of dregs. Sucks, right? But when Tyler rescues a girl in cryo-sleep from interdimensional space, his squad of losers and misfits might be the galaxy’s best hope.

Back to sequels now! This is the sequel to one of my unexpected favourites of last year, State of Sorrow by Melinda Salisbury. I didn’t think I would like that one, but once I started reading, I couldn’t stop. Right when Sorrow is getting ready to take over her father’s responsibilities as ruler, her supposedly dead brother shows up and, backed by the rival nation, wants to claim his right to rule. This sets off a whirlwind of political scheming and of course there’s the question whether this boy is truly Sorrow’s sister. I absolutely adored State of Sorrow and I have to know what happens next!

A Torch Against The Night & A Reaper At The Gates

One of my favourite books of the year so far, was An Ember in the Ashes by Sabaa Tahir. In this brutal world, inspired by the Roman Empire, we meet Laia and Elias. She’s a slave, he’s the most promising soldier in his school. I desperately want to know what happens next to these two, but I am also terrified since Tahir has the reputation of making her characters suffer.

Now I Rise & Bright We Burn

Yes, more sequels! What if Vlad the Impaler had been a girl? That’s the premise of And I Darken by Kiersten White. While based on historical events and people, you shouldn’t read this as historical fiction that will teach you everything about this period in time. White not only changed Dracula’s gender, but also tweaked history itself to better fit the story. Nevertheless, this is a great series with a main character who won’t win any Miss Congeniality trophies, but whom you’ll sympathize with anyway!

This is a debut novel that was released earlier this year. It’s set in a Eastern European-inspired world and brings together three characters who must assassinate the king and stop the war: a girl who can speak to gods, a prince in danger and a boy with a monstrous secret. Wicked Saints sounds deliciously gothic, which I can’t resist. And following author Emily A. Duncan on Twitter has made me so curious about these three main characters (especially Malachiasz!). Seriously, I might speed up my reading just to break that buying ban and get my hands on this one!

Escaping from Houdini & Capturing the Devil

Speaking of gothic… How about two young forensic scientists in the late 19th century? Previously in Kerri Maniscalco’s series, Audrey Rose and Thomas crossed paths with Jack the Ripper and hunted a killer in Dracula’s castle in delightfully creepy novels. Meanwhile, they grew from reluctant partners to… more… And now, in Escaping from Houdini, they set sail across the Atlantic. But on their ship, privileged young women start to go missing. Can Audrey Rose and Thomas solve the mystery? Escaping from Houdini was published last year, while Capturing the Devil – the finale to the series – will land in bookstores in a few weeks. I look forward to curling up in bed with these books on a cold and dark winter evening!

A Treacherous Curse & A Dangerous Collaboration

If you’re in the mood for a mystery set in Victorian-era London, but not for creepy horror stories, this series by Deanna Raybourn is a perfect choice. I adore Veronica and Stoker, they’re the perfect crime-solving duo. And their chemistry is THE. BEST. Their conversations often make me laugh out loud and I keep yelling “just kiss already” at the pages. I’ve actually already read A Treacherous Curse (book number 3 in the series), but I still need to get myself a copy that matches those of A Curious Beginning and A Perilous Undertaking. And then I have to wait until A Dangerous Collaboration is published in that same matching edition, which will probably be somewhere in spring 2020. *Cries impatiently*

Smoke in the Sun

This is – you guessed it – another sequel. In Renée Ahdieh’s Flame in the Mist, we met Mariko. On her way to the imperial palace to get married, her convoy is attacked by a group of bandits. The sole survivor, Mariko decides to go undercover as a boy and infiltrate this Black Clan, to find out who is behind the attack. Here, she finds herself appreciated for her intellect for the first time in her life. And there is a certain boy who makes her question everything she’s ever learned. I loved the slow-burn romance in this story! And there were some intriguing scenes in the imperial palace that I need to know more about!

One of my favourite books I read last year was Strange the Dreamer by Laini Taylor. I adored Lazlo and Sarai so much. And the writing was absolutely gorgeous! I often find my eyes straying across the page, but not with Strange the Dreamer. I wanted to soak in every single word, I couldn’t stop thinking about this book, and I didn’t want it to end. But it did and that ending came with a terrible tragedy. I won’t go into details because of spoilers, but I am so excited to read Muse of Nightmares! (And you should go read Strange the Dreamer, if you haven’t already)

Is this another Jay Kristoff book, you ask? Why yes, it is. The first of his books that I read, was Nevernight. And I loved it so much. It was brutal, soaked in blood, action-packed and dripping with sarcasm. Just as I like it. Mia is one of my favourite protagonists and her shadow not-a-cat Mr Kindly is hilarious (but also scary…?). The ending of Nevernight shocked me, but the sequel – Godsgrave – was even worse/better. I can’t wait to get my hands on Darkdawn, the finale of the series. But I’m also terrified and I’m not sure I’m ready for it. HALP?!

The Priory of the Orange Tree

Let me start with this: this book is huuuuuuge. It’s well over 800 pages long and in photos it looks like an absolute behemoth. Which is part of the reason why I want to read this (I like big books and I cannot lie, y’all – and then I wonder my book buying ban never seems to end…). You might know author Samantha Shannon from her YA series The Bone Season, but Priory is an adult fantasy novel. It tells the story of Queen Sabran – who must conceive a daughter to protect her realm -; of Ead – lady-in-waiting and loyal to a hidden society of mages -; and of Tané – who has trained all her life to be a dragonrider, but is forced to make a choice that could see her life unravel. Epic fantasy with a f/f romance? Please inject this straight into my veins!

And finally, to conclude my shopping list for when my book buying ban ends… Spin the Dawn by Elizabeth Lim is a book I desperately want to read. I talked about this when it was published in July, but in case you missed that: Spin the Dawn is described as “Project Runway meets Mulan” and how amazing does that sound?! When a royal messenger summons her ailing father, a tailor of renown, to court, Maia poses as a boy and takes his place. Now she has to compete with eleven other tailors for the job. And the court magician seems to see straight through her disguise… This sounds like it’s filled with backstabbing, and I am so here for that!

And that concludes my wishlist for after my buying ban. At my current reading speed, it will be 2020 before that buying ban ends and I can get started with these books. So if you have any tips and tricks to read more and/or faster, let me know below! And also let me know which books are next on your shopping list!