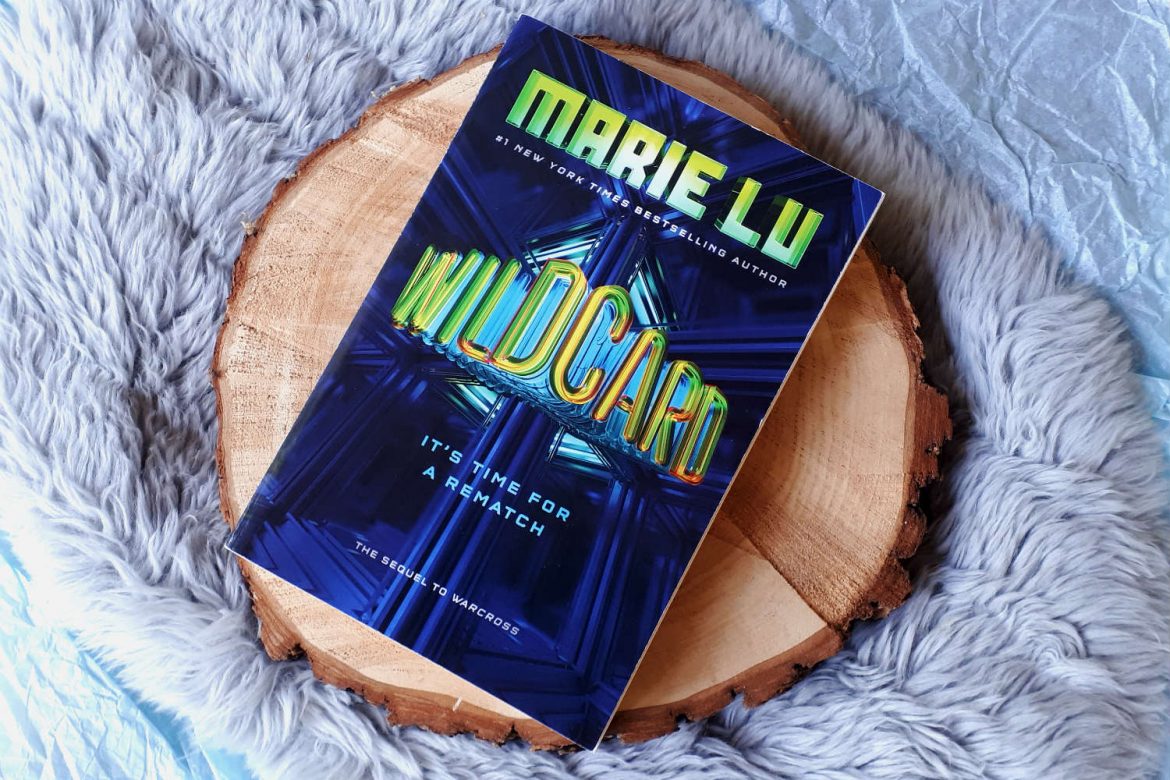 After some historical fiction, it’s time to dive back into Young Adult literature, with a fantasy/scifi story. As someone who loves playing video games, I couldn’t NOT pick up Marie Lu’s Warcross series. Last year, I read and reviewed the first book, Warcross. Now it’s time to take a look at Wildcard, the second and final part in this duology.

Mind you, I’ll be talking about the story of Wildcard (no spoilers though about this book), so there will be spoilers for Warcross – the first book in the series – below! Proceed with caution!

We pick up the story after Emika finds out that Hideo’s VR glasses/Warcross platform comes with an algorithm that can manipulate its users. And it’s getting rolled out worldwide at an alarming rate. Emika is shocked and feels betrayed by Hideo. So she teams up with the Phoenix Riders – her Warcross team – to try and stop him. But someone has put a bounty on Emika’s head and her only hope to survive lies with Zero, the mysterious hacker who turned out to be Hideo’s missing brother. Can Emika navigate this web of lies and betrayal?

I really enjoyed Warcross and gave it four stars. But the best word to describe this sequel is “meh”. Maybe this is because the previous book I read was over 1.000 pages long and meandered through the story, but Wildcard feels a bit rushed. I checked my copies: Warcross has 353 pages, Wildcard 341. That’s not even 700 pages for a whole lot of conflict to be set up and then resolved. And frankly, it’s not enough.

Where did Warcross go?

One of the things I loved about the first novel, were the Warcross games, where one team takes on the other, and everyone has their specific role to play. But in Wildcard, there aren’t any proper games. That was a bit of a disappointment for me personally.

What I did like, were the minor characters. Emika’s team is a great group of people and I loved finding out more about them, especially Tremaine and Roshan! They don’t get a lot of screen time (this book focuses on Emika, Hideo and Zero), but when they do, they are the stars of the story, if you ask me.

Furthermore, while I want to like Emika, she feels so bland. In fact, it felt like she didn’t have any meaningful impact on the developments in the story. And this whole affair might very well have worked out the same way without her. I just don’t know what her contribution to all of this was…

Add to that the fact that the conflict was resolved very easily and smoothly. There were almost no hiccups along the way, no setbacks that make you wonder how the characters are going to get out of it. Instead, it almost felt like a checklist of the difficulty level of doing grocery shopping. Maybe I got this impression because the main character, whose POV we follow, didn’t actually do a lot? Maybe it was because she barely experienced any road bumps? I don’t know…

And finally, I felt like Hideo’s actions were whitewashed. With liters and liters of bleach. Seriously, the man created an algorithm to control the entire world population. His algorithm lead to people jumping from a high building because they did something wrong earlier in their lives and the algorithm made their guilt unbearable. But Hideo gets off really lightly here. I’m not going into details, but there should be serious consequences for these horrific acts, even if they’re born out of good intentions. Unfortunately, there aren’t…

So yeah, as much as I liked Warcross and wanted to like its sequel, Wildcard is a bit of a let-down. It looked so promising and at times, it took an exciting turn. But it never really delivered. So I can only give this one 3 stars.

For the millions who log in every day, Warcross isn't just a game - it's a way of life. And teenage hacker Emika Chen has found herself caught up in a conflict that could change the world.Warcross creator, Hideo Tanaka, wants to use to the game to control peoples' thoughts and feelings, effectively ending free will - Zero, a mysterious (and dangerous) hacker, wants to stop him.Now Emika must decide who she will fight for. The game is on . . .From #1 New York Timesbestselling author Marie Lu