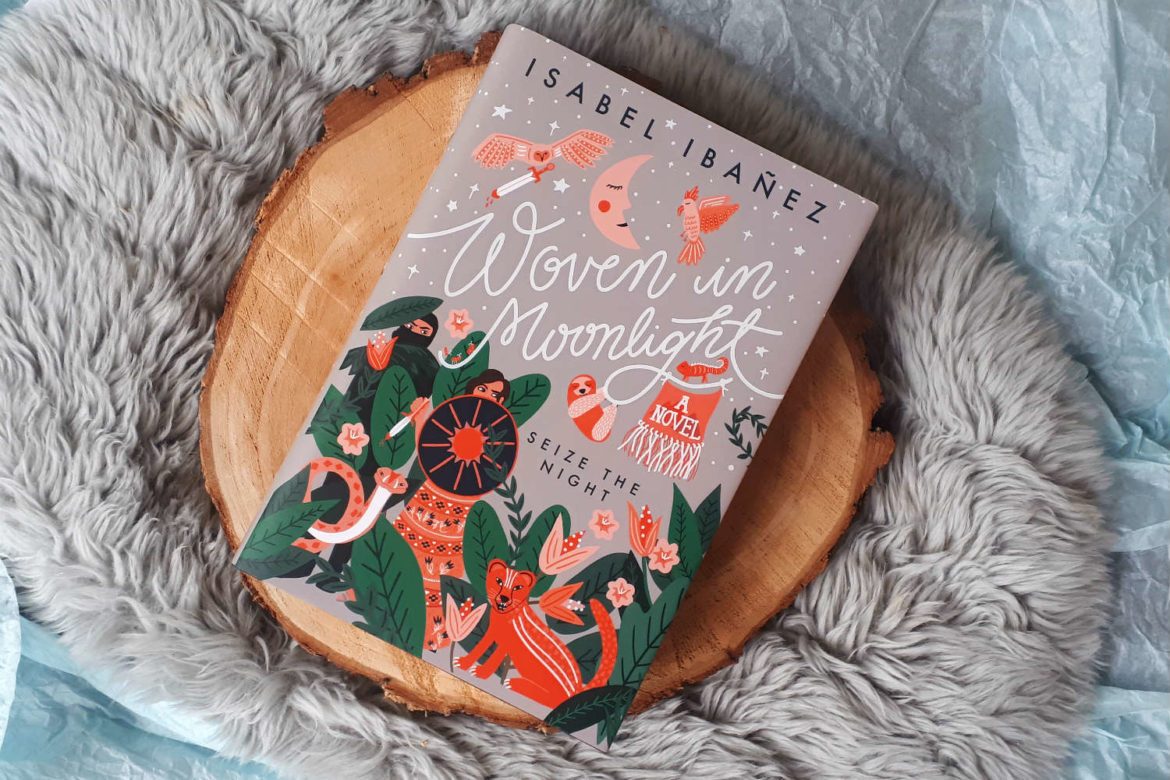 Hi everyone! I hope you’re all doing well. How are you keeping up with this current global situation? I am trying to keep my mind distracted from everything that’s going on. Luckily, there are so many books I can escape to! Here’s my review of Woven in Moonlight, by Isabel Ibañez!

Ximena knows what her role in life is: she is the stand-in for the Condesa, the last remaining Illustrian royal. Her people lost everything when the usurper, Atoc, used an ancient relic to summon ghosts and drive out the Illustrians. When Atoc demands the Condesa’s hand in marriage, it’s Ximena’s duty to go instead. Ximena sees this as a chance to search for the deadly relic, so she can help return the Condesa to her rightful place. She uses her weaving ability to hide messages in tapestries for the resistance. But then another option presents itself: there could be a way to overthrow the usurper without starting another war, but only if Ximena turns her back on revenge and her Condesa.

This was really good! The story is woven like a tapestry and it sparkles like Ximena’s moonlight thread. And the descriptions of all the food! It made my mouth water! It’s a bit of a slow-burn, which gives us plenty of time to get to know Ximena and see how she grows. Because yes, there is quite a lot of character development happening for her!

I love stories of warring factions with a character who firmly believes in what their side tells them and thinks of the other side as monsters or savages, only to discover the world isn’t so black and white.

I also enjoyed the other characters. Especially the masked vigilante El Lobo, who was very swoon-worthy, and Rumi, the healer.

And despite the story being a slow-burn, the finale was fast-paced, adrenaline-inducing, and kept me up way past my bedtime because I just *had* to finish it!

My main issue with this book (and the reason I’m not giving it 5 stars), is the magic system. Some people are shown to have magic, which manifests differently for each person. But it isn’t clear whether everyone has magic, or only some people do…?

That being said, Ximena’s magic was wonderful! And once you get to the point where the full extent of her powers becomes clear, you’ll also understand the gorgeous cover design! By the way, this cover was designed by the author herself! How amazing is that?! (For the record: my edition is a Fairyloot exclusive, the regular edition has a black background)

One thing I haven’t mentioned yet, is the setting of Woven in Moonlight. It’s inspired by Bolivian politics and history. I have to admit I’m not really familiar with that history, but I recognized some elements (mainly the fighting between the Illustrians and the Llacsans, and the coca plant) from the little I do know.

So all things considered, Woven in Moonlight gets a solid 4 stars from me! And I’m already looking forward to the companion novel, Written in Starlight, that is coming in 2021!

A lush tapestry of magic, romance, and revolución, drawing inspiration from Bolivian politics and history. “A lush, vibrant feast of a book.” – Margaret Rogerson, NYT bestselling author of An Enchantment of Ravens “A wholly unique book for the YA shelf.” – Adrienne Young, NYT bestselling author of Sky in the Deep “A spellbinding, vivid debut.” – Rebecca Ross, author of Queen's Rising Ximena is the decoy Condesa, a stand-in for the last remaining Illustrian royal. Her people lost everything when the usurper, Atoc, used an ancient relic to summon ghosts and drive the Illustrians from La Ciudad. Now Ximena’s motivated by her insatiable thirst for revenge, and her rare ability to spin thread from moonlight. When Atoc demands the real Condesa’s hand in marriage, it’s Ximena’s duty to go in her stead. She relishes the chance, as Illustrian spies have reported that Atoc’s no longer carrying his deadly relic. If Ximena can find it, she can return the true aristócrata to their rightful place. She hunts for the relic, using her weaving ability to hide messages in tapestries for the resistance. But when a masked vigilante, a warm-hearted princesa, and a thoughtful healer challenge Ximena, her mission becomes more complicated. There could be a way to overthrow the usurper without starting another war, but only if Ximena turns her back on revenge—and her Condesa.