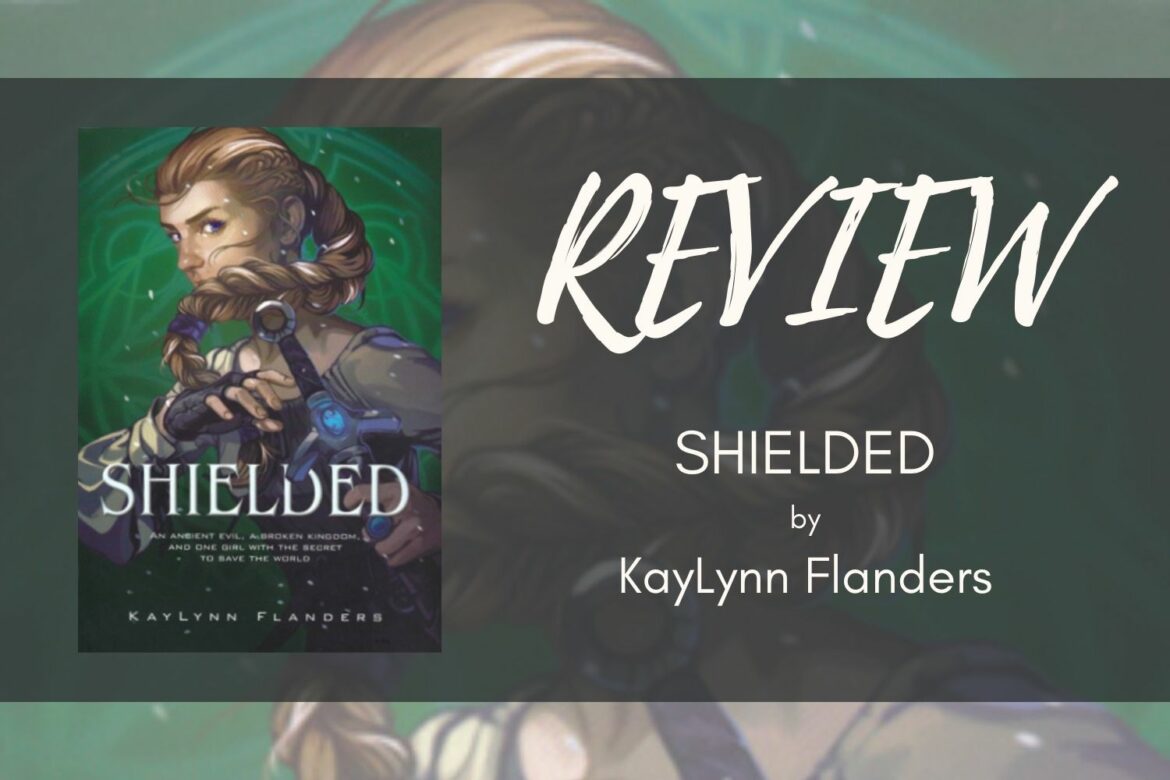 Hi everyone! How do you usually write your reviews? And do you take notes while reading? I don’t really take notes while reading, but I do write a quick review over on Goodreads once I finish the book. Later on, I use that quick review to write a proper one. Which is how I managed to finish this review quite some time after actually reading Shielded by KayLynn Flanders. Shall we dive right in?

Shielded was the featured book of the July 2020 Fairyloot box, so go check out my unboxing to see the goodies I got along with it!

The kingdom of Halendi is in trouble. It’s losing the war and a deadlier threat is looming. Princess Jennesara knows she could be an asset on the battlefield and wants to help, but her father has other plans. As the second-born heir to the throne, Jenna lacks her older brother’s magical abilities, so instead she is sent to the neighboring kingdom of Turia to marry their prince in exchange for resources. But on her way to her betrothed and new home, the royal caravan is ambushed and Jenna realizes the new threat is worse than anyone imagined. Now she must decide if revealing a dangerous secret is worth the cost before it’s too late.

This was a very fast-paced story! In fact, we barely got time to figure out Jenna’s country before she was sent off to another kingdom. While the breakneck pace kept the story entertaining by piling one event onto another, I did miss some world building.

And while I really liked Jenna and her love interest (and his sisters, they were the best!), they too felt a bit… not properly fleshed-out. They were all likeable though! Jenna is pretty sweet and despite being a warrior isn’t bloodthirsty or violent. The romance was a bit instalove-y, but I found that I didn’t really mind. I just want these people to be happy, okay?

Something that bothered me though, was this: these two countries are at war, yet (almost) everyone in Turia immediately trusts the girl from Halendi. Seriously? That just doesn’t feel very realistic.

I was also a bit confused by the magic in this book. Ren’s magic is all about healing, but Jenna’s? She has the tethers to her brother and father, but there’s also other abilities that show up later on in the story. And she masters them almost instantly. I’m jealous of her ability to learn stuff that quickly.

Anyway! Shielded is not a bad book. It’s entertaining and I’m looking forward to the sequel. But it has its flaws as well. So all things considered, Shielded gets 4 stars from me!

For fans of Sorcery of Thorns and Furyborn comes a thrilling new fantasy about a kingdom ravaged by war, and the princess who might be the key to saving not only those closest to her, but the kingdom itself, if she reveals the very secret that could destroy her. The kingdom of Hálendi is in trouble. It's losing the war at its borders, and rumors of a new, deadlier threat on the horizon have surfaced. Princess Jennesara knows her skills on the battlefield would make her an asset and wants to help, but her father has other plans. As the second-born heir to the throne, Jenna lacks the firstborn's--her brother's--magical abilities, so the king promises her hand in marriage to the prince of neighboring Turia in exchange for resources Hálendi needs. Jenna must leave behind everything she has ever known if she is to give her people a chance at peace. Only, on the journey to reach her betrothed and new home, the royal caravan is ambushed, and Jenna realizes the rumors were wrong--the new threat is worse than anyone imagined. Now Jenna must decide if revealing a dangerous secret is worth the cost before it's too late--for her and for her entire kingdom.