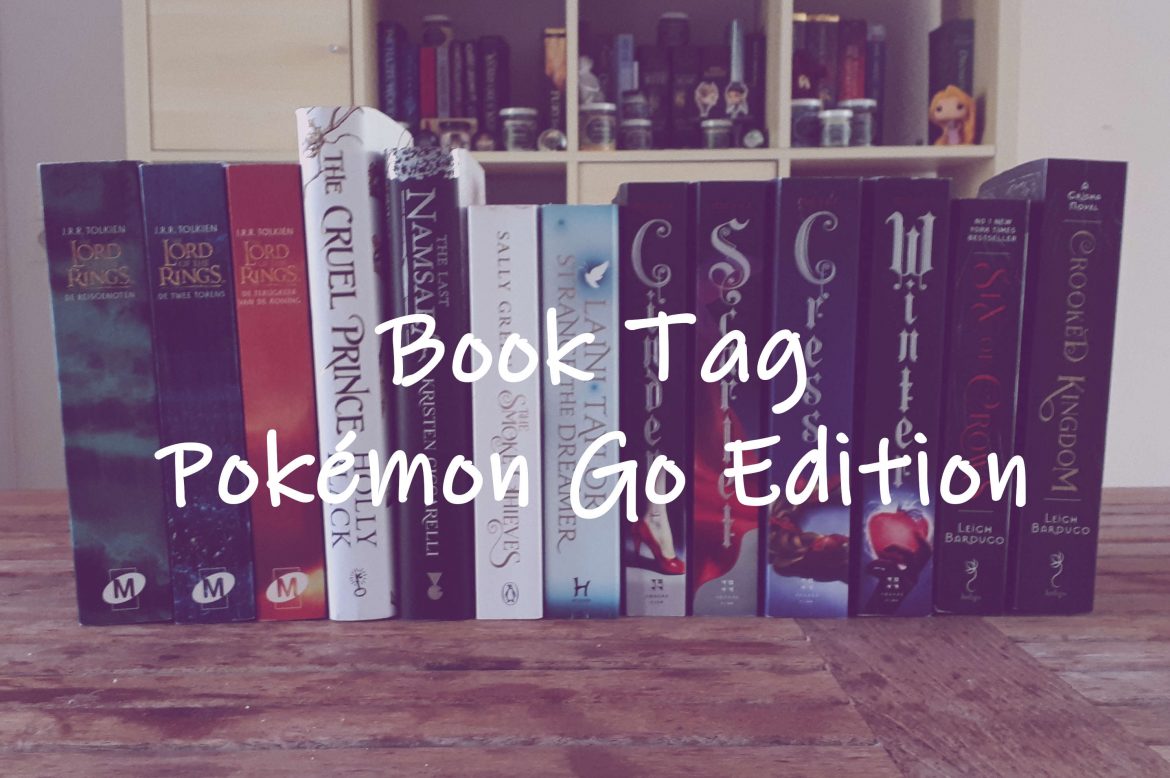 It’s Friday and that means it’s time for another book tag! I was browsing the internet for some ideas when I stumbled upon the Pokémon Go tag. I know the big hype of two years ago is gone, but I’ve recently picked up the game again. So of course I had to do this one! I want to thank Read at Midnight for coming up with the tag. She also created the graphics below!

I grew up with the original Pokémon games, so I remember the dilemma of picking my starter Pokémon. And I know Squirtle and Charmander were more popular, but I chose Bulbasaur. In Pokémon Go I have all three of these, but I’m working on collecting enough candies for their final evolutions.

Anyway, back to books! One of the earliest books I can remember reading, is Roald Dahl’s Matilda. I felt a connection with the main character and often stared at things while trying to make them move! I think Matilda made me realize that anything is possible in books, that you’re not bound by reality.

True story: I only caught my first Pikachu last month! But now I have two Pichu’s (one with a special summer hat and one without), a Pikachu with hat, Raichu with hat, a regular Raichu and an Alolan Raichu. I’m so happy with my collection!

It’s hard to pick just one classic book though. I think I’ll go with The Lord of the Rings. After Matilda, Tolkien’s books were another milestone in my reading life. They really stand out in my memories. And Frodo, Aragorn and co introduced me to epic fantasy, a genre I’ve been devouring ever since.

I need more Zubats though? I remember this one being everywhere when the game launched, but now I need more candy to evolve Golbat into Crobat and I can’t seem to find them anymore…

This is a hard question, because I don’t think this happens to me all that often. But I remember not being interested in Twilight *because* of the hype. And here in Belgium, everyone seems to read Santa Montefiore’s books, which don’t appeal to me at all. Oh wait, I just thought of one more book. It’s called “The melting” and tells the story of a young woman who travels back to the village she grew up in to take revenge. If there ever was a Zubat of books, it’s that one. I’ve read the synopsis and yeah, it’s not something I would like.

Do you know what a pain it is to catch a Ditto? You have to catch a ton of Rattatas, Pidgeys and other trash Pokémon and then hope it’s secrety a Ditto in disguise. Hint: it’s almost never a Ditto and now you’re stuck with a million Rattatas.

Hm, a book that reminds me of other books. That’s a hard one. I mean, I mainly read YA fantasy and there are a few tropes that seem to be required in these stories? Enemies-to-lovers, dead/missing parents, love triangles, secretly-the-heir-to-the-kingdom,… A recent example is Grace and Fury. I loved this book so much, but Nomi’s storyline with the “princes” reminded me of Red Queen.

I have never seen a Snorlax in the wild and I thought I’d never get one, until last month when it was a reward from the field research tasks. So now I have two of them! They’re kind of boring though and I barely use them. But whatever!

I’m not easily intimidated by the size of a book or series. The bigger, the better, if you ask me. That being said, I have a copy of The Pillars of the Earth on my shelves. It’s over 1000 pages long and while I’d love to start reading, I’m putting it off because it would mess up my reading challenge.

Does anyone else remember how annoying it was to fight Gastly and other ghost types in the old games? They were immune to so many types of attacks, aaargh!

I like how this question says “A book”, like there is only one ever that has kept me up at night. I frequently tell myself “one more chapter” or “only 100 pages left, I can do this”. And then I wonder why I’m always so tired, oops! The latest book that made me miss my bedtime, was Sky in the Deep. Which is also the most recent book I read.

Oh boy, these two! I have Nidorino and Nidorina, but am still collecting candy for the King and Queen. Also, how do you pronounce the names of their base forms? Male Nidoran, Boy Nidoran, Nidoran Boy,…? Help me!

Okay, for the people who aren’t familiar with acronyms: OTP stands for One True Pairing. In other words, my favourite fictional couple. Someone on Bookstagram asked the same question earlier this week and it’s so hard to pick just one couple! But I will forever love Jamie and Claire from Outlander, Feyre and Rhysand from A Court of Thorns and Roses, and Sorcha and Red from Daughter of the Forest.

Aah, Rapidash, one of the blanks in my Pokédex… I have one Ponyta, but not enough candy to evolve her yet. And I love Rapidash, so this hurts!

I’d say Winter (part 4 of the Lunar Chronicles) matches this description really well. It’s over 800 pages long, but I finished it in 4 days. Marissa Meyer’s writing is easy to read and this book was filled to the brim with action. It never got dull, which is quite an achievement for such a tome.

Did any of you participate in the Eevee Community Day a few weeks ago?! These little fluffballs spawned like crazy! I now have all five available Eeveelutions in both their regular and shiny forms. And I have a ton of candy left for when the next generations make an appearance, yay!

When it comes to books and spin-offs, I’m not a big fan of spin-off after spin-off. I mean, I love me some big and long series. The more books, the merrier. But I also think you should at one point wrap up the story and leave it at that.

Magikaaaaarp! When I caught my first Magikarp and saw that it would take 400 candies to evolve it into Gyarados, my first thought was: “Oh well, I’ll never get a Gyarados”. 400 candies just seemed impossible. But now there’s a quest that requires you to evolve a Magikarp if you ever want to catch Mew. So I made this flopping fish my buddy and we’ve already collected nearly 300 candies by walking and occasionally catching more Magikarp. There’s a motivational story in there, I think.

As you know by know, I am subscribed to Fairyloot. That means I get a recent release every month. Earlier this year, that was State of Sorrow by Melinda Salisbury. The cover didn’t appeal to me, it looked like a soft melodrama. And the synopsis sounded average as well. But then I started reading and IT. WAS. AMAZING. Like 5 stars amazing. I can’t want for the next part of the series!

So I hadn’t played Pokémon Go for over a year when I picked it up again at the end of June. And guess what? I had just missed Articuno Day, a day when you could catch this legendary Pokémon. It then disappeared from the game again, so I’ll have to keep my fingers crossed that it makes a return soon-ish.

One of the series I keep seeing everywhere on Bookstagram, is An Ember in the Ashes by Sabaa Tahir. It’s been on my TBR list for ages now, but I never seem to get around to actually buying it. I’ve heard so many good things about these books though, so I’ll move it higher on my wish list!

These two! I really want to have them, but it’s so hard to get them… For Mewtwo, you have to do a lot of raids, then get an invitation for a special raid (if I understand it correctly). Yeah, that’s going to take a while. And for Mew you have to do all these quests: evolve a Magikarp, catch a Ditto, reach level 25, etc. But I’m slowly getting there, y’al!

I’m not really into the whole collector’s editions stuff, to be honest. I mean, if I already own a book, I’m not going to buy a second edition of it just to show off. However, I don’t own the Harry Potter books (the Dutch version I read kind of belongs to my family and I therefore left them at my parents’ house). And I would love to buy a set, so I’m looking around to see which edition I like best.

Yes! Poké-eggs! The reason to make that extra detour on your walk! And then, after you’ve walked a handful of kilometers, the eggs hatches. You’re of course hoping for a rare Pokémon like Togepi, but instead you get… another Shellder…

Ah, this is actually a hard question. Every month, I make a list of new releases I’m looking forward to, but I don’t usually check if they’re debuts. After some digging, I found out that Mirage, one of my recommendations for this month, is actually Somaiya Daud’s debut novel. It’s a space opera/fantasy about a girl who is forced to become the hated princess’ body double. I’m definitely picking this one up!

Confession: I have a handful of these, but have never used them. I’m a terrible hoarder, I know! I do however like to hang around Pokéstops when other people have used these lures, to catch the Pokémon it attracts.

Hm, I don’t think there are authors that are auto-buys for me. I still want to know what the book is about and stuff. But some of my favourite authors that I want to read more from, are Sarah J Maas (Kingdom of Ash hype!) and Jay Kristoff.

Do you remember back when the game was first released and the servers kept crashing? Aaah, those good old days! Recently, my boyfriend and I took a long walk to a park to catch a few ghost type Pokémon. That was a 10 kilometer round trip and right in the final kilometer the servers went down. Imagine that had happened an hour earlier…!

Is there any other answer to this than The Winds of Winter? A few years ago, I reread all the available A Song of Ice and Fire books, because it seemed like TWoW would be published later that year. It didn’t. I think I’ll need another reread when we get an official release date, because all these Golden Companies and Second Sons are confusing.

That was all for today! Now I’ll be reading books and hunting Pokémon. If you’re reading this, consider yourself tagged to do the list yourself. Or just answer some of these questions in the comments below!