New Books I Look Forward To In January 2020 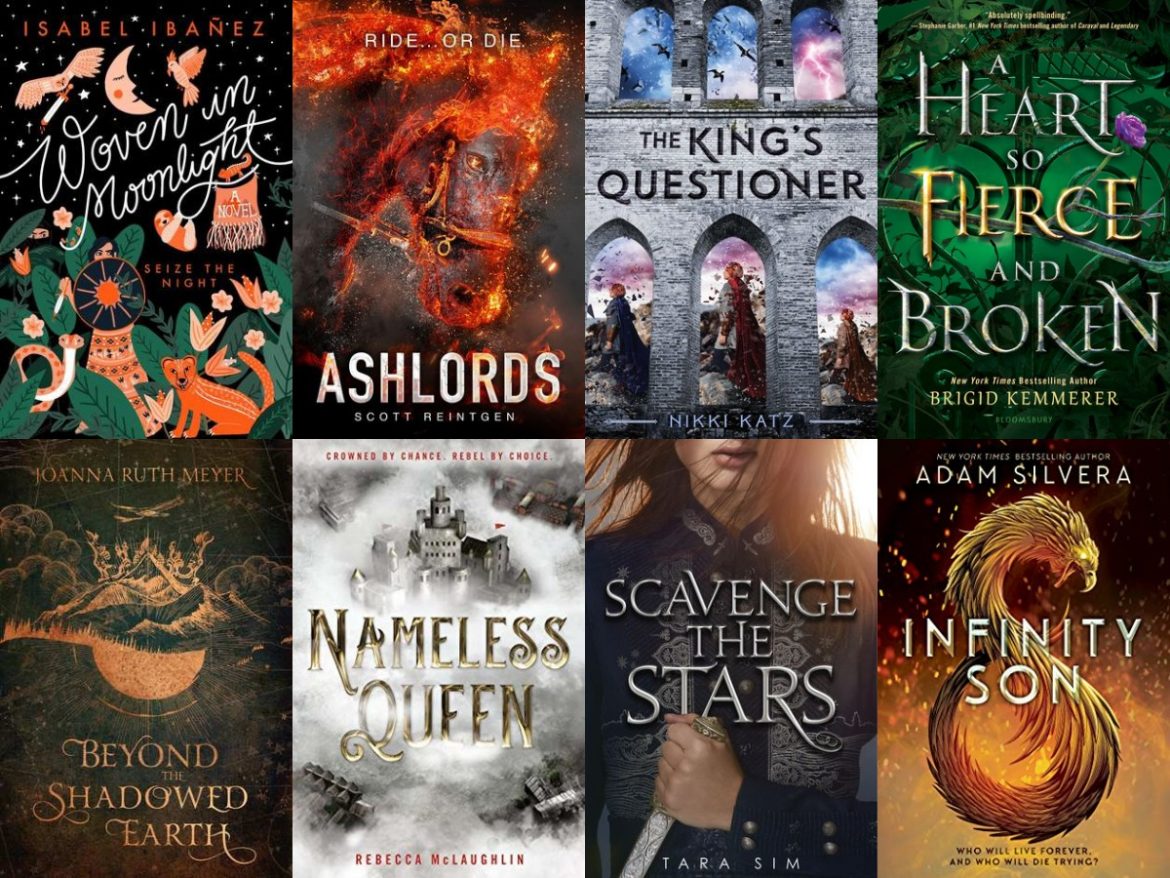 Hi everyone! I hope you’ve had a wonderful Christmas (if you celebrate) and I wish you all the very best for the new year! Why not start 2020 with a load of new books? Like every month, I put together a list of 8 books hitting the shelves in January 2020 I’m most excited about. And let me tell you, it wasn’t easy to pick just 8! So without further ado, let’s take a look at my list

Ximena is the decoy Condesa, a stand-in for the last remaining Illustrian royal. When Atoc, a usurper who used an ancient relic to drive the Illustrians from La Ciudad, demands the real Condesa’s hand in marriage, it’s Ximena’s duty to go in her stead. She grabs this chance, hoping to find Atoc’s relic and help her people. Ximena uses her ability to spin thread from moonlight to hide messages for the resistance, but when she is challenged by a masked vigilante, a warm-hearted princess and a thoughtful healer, her mission becomes more complicated. There might be a way to overthrow the usurper without starting another war – but only if Ximena turns her back on revenge and her Condesa. Last week, I mentioned that I should read more latinx-inspired (fantasy) novels. And here is a story that draws inspiration from Bolivian politics and history! Out on January 7th!

Every year since the Ashlords were gifted phoenix horses by their gods, they’ve raced them: first into battle, then on great hunts and finally for the pure sport in The Races. But the modern version requires more than good riding. Competitors must be skilled at creating and controlling phoenix horses made of ash and alchemy, which are summoned back to life each sunrise. Murder is outlawed, but breaking bones and poisoning ashes? That’s all legal and even encouraged. In this year’s Races, eleven riders will compete, but three of them have more to lose than the rest: a champion’s daughter, a scholarship entrant, and a revolutionary’s son. Who will attain their own dream of glory? Let’s be honest: phoenix horses sound so friggin’ amazing! Out on January 21st!

Kalen has been cursed with a gift: he is a mental picklock, able to access a person’s memories and secrets by touch. This makes him the perfect questioner to the king and he spends his days interrogating prisoners of the crown. But when Kalen’s estranged childhood friend, Prince Cirrus, falls into a sudden coma, the king begs Kalen to intervene. The latter accesses Cirrus’ mind – and uncovers a terrifying secret. The prince has a sister, banished long ago, and she is the key to the destruction or survival of the kingdom. Together with Cirrus and a thief named Luna, Kalen must find the princess and bring her home. Magic, princes, secrets: I need this! Out on January 14th!

A Heart So Fierce And Broken – Brigid Kemmerer

This is the sequel to A Curse So Dark And Lonely. In that story, Harper is kidnapped in the streets of Washington, D.C., and taken to the kingdom of Emberfall, where the prince is cursed to turn into a monster. In this sequel, the curse is finally broken. But rumours circulate that prince Rhen is not the true heir. And although he has Harper by his side, his guardsman Grey is missing. Grey, rumoured to be the heir, has been on the run and has no desire to challenge Rhen – until Karis Luran threatens to take Emberfall by force. Can her own daughter convince Grey to stand against Rhen, for the good of Emberfall? I loved the first book in this series and I can’t wait to read what happens next to these characters, especially Grey! Out on January 7th!

This is set in the same world as Beneath the Haunting Sea, but it is not a sequel, so I think you can read this as a standalone. Eda has always dreamed of becoming empress. Haunted by ambition and selfishness, she’s convinced that the only way to achieve her goal is to barter with the gods. But she bargains away the soul of her best friend in exchange for the crown. Years later, her hold on the empire begins to crumble and her best friend unexpectedly dies. Eda embarks on a journey to confront the god who gave her the kingdom. She soon discovers that he’s trapped at the center of an otherworldly labyrinth and that their bargain is more complex than she imagined. Out on January 14th!

Everyone expected the king’s daughter would inherit the throne. No one expected it would be a Nameless instead. A member of the class of citizens so disrespected, they don’t even get names. In fact, dozens of them have been going missing for months and nobody seems to care. But now this one Nameless girl is queen. Can she rule in a palace that is even more dangerous than the streets? And what will become of the Nameless if she doesn’t? This sounds super fascinating! I’m a sucker for palace intrigue and the fact that our main character doesn’t have a name will definitely make it even more interesting! Out on January 7th!

Amaya has been held captive on a debtor ship for years. When she rescues a mysterious stranger from drowning, she fears this might have earned her a longer sentence. But the man offers her riches and a new identity, setting Amaya on a course through the coastal city-state of Moray. She wants one thing: revenge against the man who ruined her family. But she becomes entangled in a game of deception and her path intertwines with the son of the man she wants to bring down. And Amaya soon uncovers the truth about her past, making her realize she must trust no one. A gender-swapped retelling of The Count of Monte Cristo? *Immediately adds to TBR list* Out on January 7th!

Growing up in New York, brothers Emil and Brighton always idolized the Spell Walkers – a vigilante group born with powers, that wants to rid the world of specters. Those specters violently steal the essence of endangered magical creatures. Brighton wishes he had a power so he could join the fray. Emil, on the other hand, just wants the fighting to stop. Then, in a brawl after a protest, Emil manifests a power of his own. A power that puts him at the heart of the conflict and sets him up to become the heroic Spell Walker Brighton always wanted to be. This is urban fantasy, which is not entirely my thing. But the focus on brotherhood in this story caught my eye! Out on January 14th!

Looking for even more new books to read? Here is the full list of January 2020 YA releases!

And that’s the full list of new books hitting the shelves in January 2020! Which ones are you looking forward to the most? Let me know in the comments!