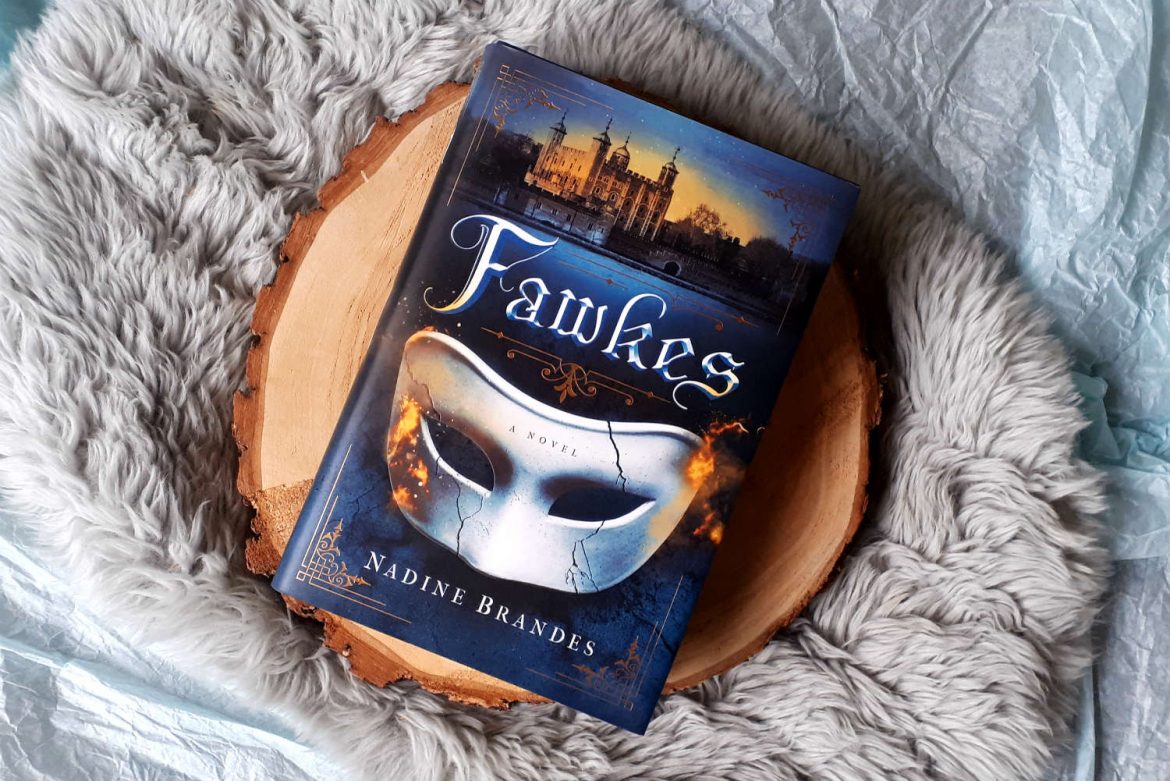 Hi everyone! How was your weekend? Mine was pretty quiet, just the way I like it! I realize I’ve mainly been posting reviews these last few weeks, instead of more fun/creative posts. I just haven’t been in the right mood to write those other posts. But I have a few ideas and I’ll try to work on them this week! In the meantime, let’s take a look at what I thought of Fawkes, by Nadine Brandes

Thomas Fawkes is turning to stone. He is infected by the stone plague and the only cure is to join his father’s plot to assassinate the king of England. For the king is an Igniter, and the Keepers (like Guy Fawkes and his fellow plotters) believe the Igniters caused the plague. There is just one problem: the Gunpowder plot to blow up Parliament will also kill the family of the girl Thomas loves. But backing out will send his father to the gallows…

The story of Guy Fawkes, told through the eyes (or well, eye) of his son, and with magic based on colours.

How amazing does that sound?! And Fawkes was a great book! It wasn’t exactly fast-paced though, so be aware of that. There was a lot of talking among the plotters, and between Thomas and Emma, the girl he loves. So if you expect some heart-pounding action, this is not the book for you, I’m afraid.

While I didn’t connect with Thomas at first, he grew on me later on. Emma was my favourite character though. She has an interesting story, which I can’t talk about because spoilers, but the scenes with her were my favourites.

I already mentioned the magic based on colours, so let’s talk about that some more. The way this magic works is pretty simple, yet fascinating: you get a mask that grants you the power to control one colour. So let’s say your colour is red. That means you can manipulate everything that’s red: clay, blood, and so on. At least, that’s how the Keepers’ magic works. Igniters, on the other hand, can use every colour. And it’s this different view on magic that sparks the conflict between these groups.

Fun fact: the conflict between Keepers and Igniters is actually inspired by the real-life fights between Catholics (the Keepers) and the Protestants (Igniters) in 16th and 17th-century England. I love how Nadine Brandes adapted this religious conflict into one about magic!

And then there is the stone plague, an infectious disease that turns people into stone. Both sides blame the other for it. Meanwhile, Thomas is struggling with the infection that already cost him one eye. I liked how we were shown how he dealt with that. This plague is (of course) inspired by the actual plague that struck Europe.

So as you probably know, Guy Fawkes did exist and he did plot to blow up Parliament and the king. This story stays quite true to the historical events surrounding the Gunpowder Plot, with some added magic of course. And while Thomas is the author’s own character, the other plotters were all real people. So if you don’t know much about these events, you might want to hold off looking it up online until after you’ve read this book.

If you’re looking for a fun book to read around the 5th of November, featuring the Gunpowder Plot and some added magic, I can really recommend Fawkes. Just be aware that it is not exactly fast-paced, but that is compensated for by a fun magic system.

ilent wars leave the most carnage. The wars that are never declared, but are carried out in dark alleys with masks and hidden knives. Wars where color power alters the natural rhythm of 17th century London. And when the king calls for peace, no one listens until he finally calls for death.

But what if death finds him first?

Keepers think the Igniters caused the plague. Igniters think the Keepers did. But all Thomas knows is that the Stone Plague infecting his eye is spreading. And if he doesn’t do something soon, he’ll be a lifeless statue. So when his Keeper father, Guy Fawkes, invites him to join the Gunpowder Plot—claiming it will put an end to the plague—Thomas is in.

The plan: use 36 barrels of gunpowder to blow up the Igniter King.

The problem: Doing so will destroy the family of the girl Thomas loves. But backing out of the plot will send his father and the other plotters to the gallows. To save one, Thomas will lose the other.

No matter Thomas’s choice, one thing is clear: once the decision is made and the color masks have been put on, there’s no turning back.