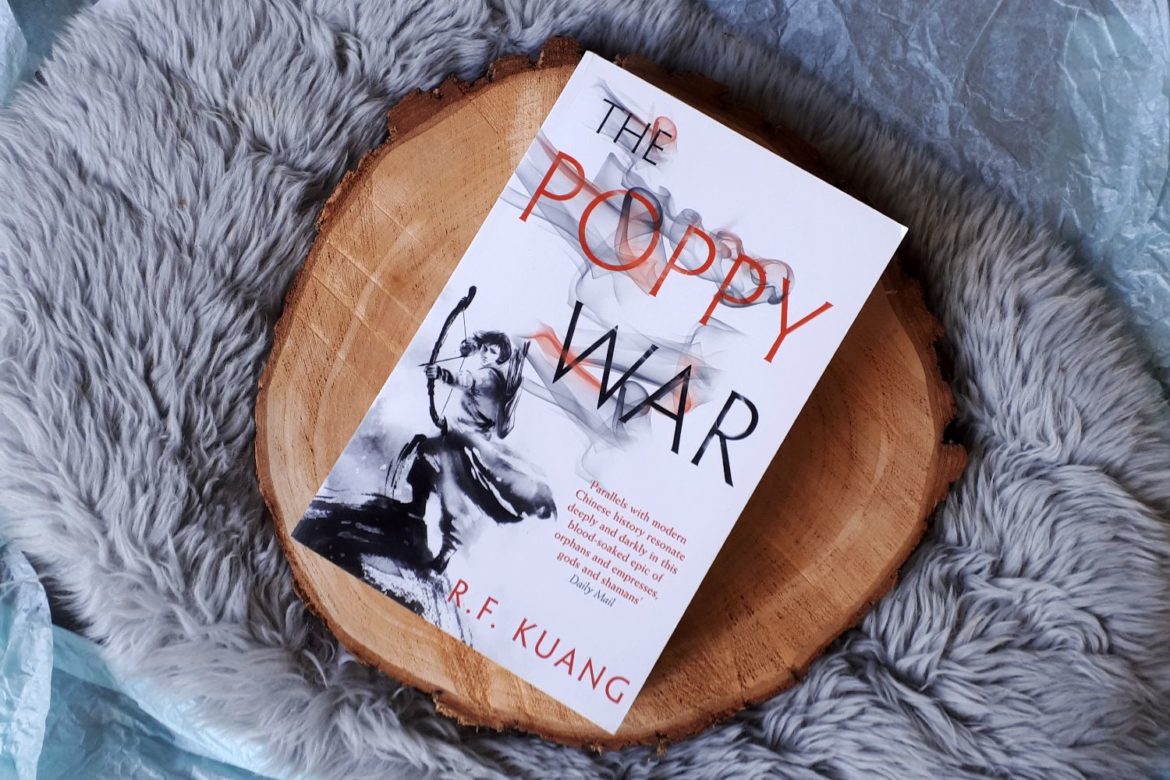 Hi everyone! I hope you are all safe and healthy. I’m still doing my best to leave the house as little as possible, but luckily there’s enough stuff to keep me from getting bored here. Hopefully you can focus your attention on fun things as well! Anyway, let’s get to the point. Today, I want to talk about The Poppy War by R.F. Kuang, an adult fantasy novel. Here’s what I thought of it.

Rin is a war orphan living in a small town. Nobody expected she would ace the Empire-wide test to find the most talented youth to learn at the Academies, but she did. At Sinegard, the most elite military school, her life isn’t easy. But while rival classmates (and even some teachers) target her, she discovers an aptitude for shamanism. Mastering these powers could be of the highest importance because the Federation of Mugen prepares an invasion. But winning the war may cost Rin her humanity…

I bought this book well over a year ago, but because I kept hearing how great it was, I put off reading it. Out of fear of not liking it and being disappointed.

But those fears were entirely unjustified.

The Poppy War might start like every other fantasy school setting, with a feud between the protagonist and the rich kid. But it soon became so much more! The Academy is only the first part of the book and we skip forward a few times in a sort of training montage. Afterwards, we travel with the characters across the country, where they are faced with the reality of war.

The writing is great! The characters all felt real and layered. So much so that I cried when something bad happened to them… which was all the time, basically. I even felt sympathy for the insufferable jerk. Go figure. Rin is one of the best protagonists I’ve come across in a while. She has some substantial flaws (and I mean SUBSTANTIAL), but those only make her more realistic. I also have a soft spot for Altan. But I can’t go into detail because spoilers. Just believe me when I say you’ll feel for him as well.

Seriously, The Poppy War is one of the best books I’ve read in a long time. It’s not a book that’ll make you happy, though. Oh no. It’ll leave you heartbroken, sobbing, and sick to your stomach.

Because it is downright brutal. If you don’t like violence, STAY AWAY FROM THIS BOOK. It includes incredibly graphic descriptions of torture, drug use, murder, genocide, animal cruelty, and while the sexual assault happens off-page it is still horrific. I had to put away this book for a bit after reading that part because I was so upset, even in the comfort and safety of my own bedroom.

The Poppy War is inspired by the Second Sino-Japanese War that waged from 1937 to 1945. And while this book is obviously fiction with fantasy elements (magic, meddling gods,…), some of the events in it are based on reality. Reading some of these passages while knowing that they actually happened in real life made it so much harder.

Humanity at its worst

What this book offers, is a look into humanity at its worst. At its most brutal, its most ruthless. At the dangers of “other-ing” people who look different, which is something that happens now as well. It’s when we stop seeing people who are “different” as human beings that atrocities are  bound to happen. The Poppy War does a good job of showing this in the conflict between the Empire and the Federation.

I love books that make you think about our world. And The Poppy War definitely does that. It won’t make you feel hopeful about mankind though.

So if you want to read a book that’ll leave you broken, that’ll make your heart race, that’ll make you cry over characters, that’ll make you reflect on humanity, – and if you can stomach the violence and brutality – then The Poppy War is the book for you! And what’s more: its sequel, The Dragon Republic is available as well, with the final installment of the series expected in November!

A brilliantly imaginative talent makes her exciting debut with this epic historical military fantasy, inspired by the bloody history of China’s twentieth century and filled with treachery and magic, in the tradition of Ken Liu’s Grace of Kings and N.K. Jemisin’s Inheritance Trilogy.

When Rin aced the Keju—the Empire-wide test to find the most talented youth to learn at the Academies—it was a shock to everyone: to the test officials, who couldn’t believe a war orphan from Rooster Province could pass without cheating; to Rin’s guardians, who believed they’d finally be able to marry her off and further their criminal enterprise; and to Rin herself, who realized she was finally free of the servitude and despair that had made up her daily existence. That she got into Sinegard—the most elite military school in Nikan—was even more surprising.

Because being a dark-skinned peasant girl from the south is not an easy thing at Sinegard. Targeted from the outset by rival classmates for her color, poverty, and gender, Rin discovers she possesses a lethal, unearthly power—an aptitude for the nearly-mythical art of shamanism. Exploring the depths of her gift with the help of a seemingly insane teacher and psychoactive substances, Rin learns that gods long thought dead are very much alive—and that mastering control over those powers could mean more than just surviving school.

For while the Nikara Empire is at peace, the Federation of Mugen still lurks across a narrow sea. The militarily advanced Federation occupied Nikan for decades after the First Poppy War, and only barely lost the continent in the Second. And while most of the people are complacent to go about their lives, a few are aware that a Third Poppy War is just a spark away . . .

Rin’s shamanic powers may be the only way to save her people. But as she finds out more about the god that has chosen her, the vengeful Phoenix, she fears that winning the war may cost her humanity . . . and that it may already be too late.