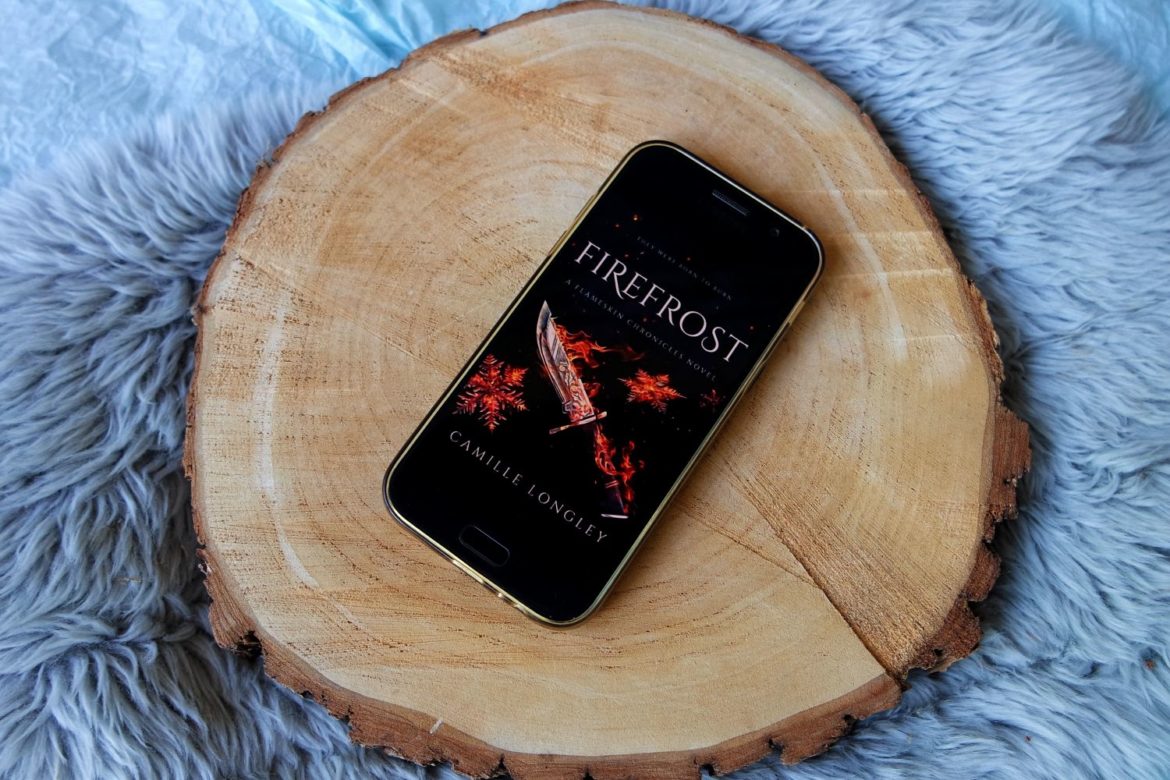 Hi everyone! How are you all doing? I seem to have hit my annual summer reading slump… It’s not that the book I’m reading isn’t good, it’s just that my mind can’t seem to focus on reading. That also means I’ll have to catch up on my reading challenge later this year. But for now, I want to talk to you about Firefrost, an upcoming novel by Camille Longley. Here’s my review!

Thank you to the author and NetGalley for providing me with a free copy in return for an honest review!

Sol is a huntress. To feed her family, she takes on a mission: guide the lady Isabella and her guards through the treacherous winter pass in the mountains. Kelan is a Flameskin, able to wield fire magic, but possessed by a pyra – a demon waiting for its chance to take control over him. Sol and Kelan are enemies in an age-old war, but when fate throws them together, they have to depend on each other to survive the journey through the mountains. As they learn more about each other, they start to question everything they thought they knew.

Firefrost is the prequel to the upcoming Flameskin Chronicles series. It serves as an introduction to the world, but I assume you won’t have to read this one to understand the “actual” series later on. That being said, I can really recommend this book.

I am intrigued by the setting in this book. The kingdom, the neighboring countries, the mountains,… But also the people: there are mages, Flameskins, mentions of dryads, ice wolves, and so on. I wouldn’t have minded more information about these things though. In fact, it took me some time to figure out what the different factions were, what a pyra is, what the difference between a mage and Flameskin is, and what the politics are. It all becomes clear later on in the book (except maybe for the political elements), but it would have been nice to have a bit more world building earlier on.

Focused on the romance

The reason why there wasn’t that much world building is probably the fact that Firefrost is very much focused on the romance between Sol and Kelan. Which I didn’t mind at all. I mean, I knew it would be heavy on the romance and that’s why I picked this book. But the romance was also cute and I loved reading about these two characters falling for each other. The way they fought their feelings because of prejudices, and how they overcame the latter.

I loved both main characters. Kelan’s struggle with his pyra was hard to read at times, because he’s clearly a great person who was forced into a role he never wanted. He might be a Flameskin, but he never felt like he belonged with them. It took me a bit longer to warm up to Sol, because she was very headstrong and set in her ways, but I ended up loving her just as much as I did Kelan. She went through quite a journey as well. From idolizing her father to realizing he might not have been as perfect as she’d always thought. Which is something we all learn about our parents when we grow up, albeit not to this degree (I hope!).

Sol and Kelan did fall in love fairly quickly, though. I had expected it would take at least 200 pages before they realized/admitted their mutual attraction, but – due to time skips in the story – that happened a lot sooner. That doesn’t mean the rest of the book was smooth sailing and honeymoon vibes. Oh no. Things went wrong, threats appeared all over the place and Sol and Kelan were forced apart. So don’t expect some slow-burn romance that ends with both characters finally confessing their feelings. Instead, the second part of Firefrost focused on the struggles they have to go through to be together.

I have one tiny remark about their romance and the way it was written. There are several instances where things get a bit heated between them (pun intended). They’re always interrupted, but this creates the impression there will be some sexy times later on. Except… that never happens. It’s not that I *demand* smut, but with the way their interactions were written, I was kind of waiting for it. But that’s probably just my dirty mind! So don’t worry, Firefrost is perfectly suitable for younger readers!

All in all, Firefrost is a great book that made me curious about the rest of the series. If you’re looking for a YA fantasy novel with a heavy focus on enemies-to-lovers romance, I can recommend this one. You can find it in stores on September 21st!

She's a huntress Sol d'Hillerod is sent on a desperate mission through a treacherous winter pass. She carries with her the only hope of her village's survival, and she will do whatever she must to keep her world from burning. He's a monster Lieutenant Kelan Birke has spent his whole life fighting for his freedom and his soul. As his control slips, and the war rages on, he knows it won't be long before he loses himself entirely to the fire that flows through his veins. Sol and Kelan are enemies in an age-old war, forced to depend on each other to survive a perilous journey through the mountains. As fire melts the ice in Sol's heart, she questions everything she's been taught to believe, and Kelan becomes more desperate to fight the flames that consume him. Together they discover that their struggle will have repercussions for both sides of this burning war.