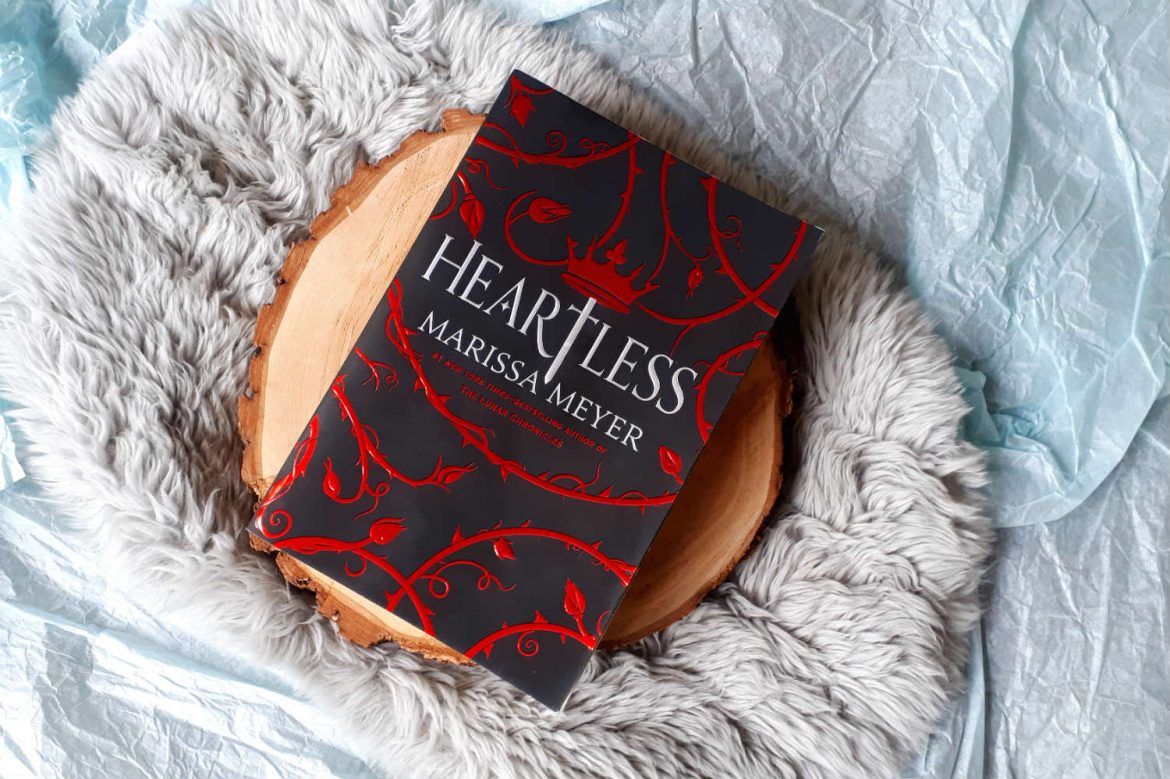 Hi everyone! I hope you’ve had a great week and that you have an even better weekend to look forward to! Today I bring you a review of a book that is a prequel to a beloved classic. What happened before Alice went to Wonderland? That’s what Heartless will tell you!

Catherine is one of the most desired girls in Wonderland and a favourite of the unmarried king of Hearts. But she has other dreams. Cath would love nothing more than to open her own bakery, something her mom says is impossible for the future queen. Then she meets Jest, the handsome and mysterious court joker. Determined to make her own decisions in life, Cath enters into a courtship with Jest, which would offend the king and infuriate her parents.

I love Marissa Meyer’s take on iconic fairy tales! I adored the Lunar Chronicles and now Heartless blew me away as well. It’s a prequel to Alice in Wonderland, and like you might expect, there was something surprising and/or whimsical behind every corner and I genuinely did not know what to expect. I have to admit I’m not familiar with Lewis Carroll’s original work, I mainly know Wonderland through the animated Disney movie. But I still recognised so many elements and references, which is something I love in books!

Cath, our protagonist, is a great character! She doesn’t fit in in this society where women are mainly supposed to get married, and can’t pursue their own dreams, especially not when they’re nobility. But Cath doesn’t give in and keeps on dreaming. Jest was a very mysterious character. So much so that I wasn’t sure what to think of him at first. Could I trust him? Or did he have ulterior evil motives? That made it difficult for me to fully warm up to him.

You see, Heartless is a perfect example of a story that keeps you guessing. Because there are so many whimsical twists and turns, you are constantly questioning everything. Can you trust what you read? It’s confusing and disorienting, but in a fun way.

And I have to mention the ending! Don’t worry, I’m not going to spoil anything, but that finale was so great! I knew what the end point of one character’s arc was going to be, but I had no idea how we were going to get there. And the way it happened! O.M.G. That was so great! The final line of the book nearly made me squeal with delight!

One note of warning though: don’t read Heartless if you’re on a strict diet. Because the way Marissa Meyer describes Cath’s baking, you’ll be craving lemon cakes, macarons and other sweets! I will tell you this: yes, there is a tea party!

So in summary, Heartless is a great and fun read, and a worthy prequel to Alice in Wonderland. If you love stories filled with whimsy, stories that keep you guessing, and stories that describe food in such a way that you can almost smell it, this is the perfect book for you.

The #1 NEW YORK TIMES bestseller that Gregory Maguire (Wicked and After Alice) calls "full of heart." Long before she was the terror of Wonderland, she was just a girl who wanted to fall in love. Catherine may be one of the most desired girls in Wonderland, and a favorite of the unmarried King of Hearts, but her interests lie elsewhere. A talented baker, all she wants is to open a shop with her best friend. But according to her mother, such a goal is unthinkable for the young woman who could be the next queen. Then Cath meets Jest, the handsome and mysterious court joker. For the first time, she feels the pull of true attraction. At the risk of offending the king and infuriating her parents, she and Jest enter into an intense, secret courtship. Cath is determined to define her own destiny and fall in love on her terms. But in a land thriving with magic, madness, and monsters, fate has other plans. In her first stand-alone teen novel, the New York Times-bestselling author dazzles us with a prequel to Alice's Adventures in Wonderland.