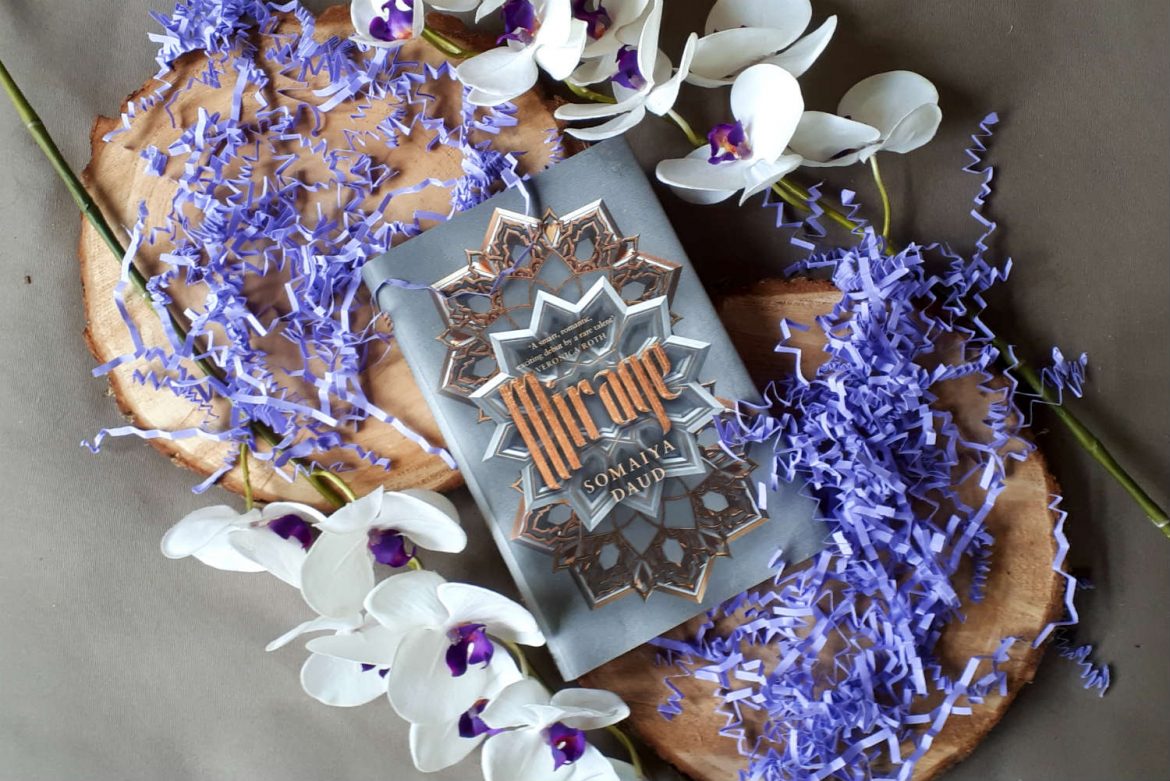 Happy Friday everyone! The weekend is (almost) here, so that means it’s time for a new book review! This week I want to talk about Mirage by Somaiya Daud. This book’s standard edition comes with a purple cover, but Fairyloot subscribers received a special edition with a grey dust jacket and purple sprayed edges. I already loved the standard cover, but isn’t this book absolutely gorgeous?! Anyway, we shouldn’t judge a book by its cover, so let’s talk about what’s inside!

Mirage tells the story of Amani (yes, our protagonist has the same name as the one in the Rebel of the Sands trilogy, which I read and reviewed before this one), who lives with her family on a moon. On the night of her majority celebration, droids kidnap her and take her to the capital of the Vathek empire, where she learns she looks exactly like Maram, the cruel half-Vathek princess. This princess is so hated by her people that she requires a body double, so Amani starts her training and has to learn to navigate this royal world.

First of all, I absolutely loved the world Daud created in this debut novel. It’s a space opera with heavy Moroccan influences. I haven’t read that many stories about outer space yet, and while I can’t say for sure that this is a unique combination, it was entirely new to me. Not just the food and clothes are Moroccan-inspired. Poetry and mythology also play a big part in this story. However, the world-building here didn’t entirely satisfy me and I wanted to see more of it. For instance, it wasn’t clear to me what kinds of technology did exist in this world and what didn’t.

We also jump around a lot, from the royal palace to a city in the north, to another moon, and so on. Some of these felt a bit out of place. I think this was mainly because we sometimes got one scene in some of them. And then we found ourselves back in the royal palace again. It’s hard to explain, but this gave me the feeling of hopping around from one plot development to the next, instead of flowing along with the story.

Luckily, our protagonist made up for this. Amani is strong and intelligent, just the way I like my main characters. When she finds herself in the royal palace, she quickly calculates her chances and realises there’s no point in trying to run away. THANK YOU! I’m sick and tired of all these too-stupid-to-live heroines who get themselves in more trouble by running around like a headless chicken. So thank you, Somaiya Daud and Amani, for being a bit more level-headed!

And I didn’t only like Amani. As weird as it may seem, I also enjoyed the scenes with Maram, the princess. Don’t look at me like that. She’s a very layered and well developed character. I won’t give anything away of the story, but I’ll say this: I loved learning more about her and couldn’t quite hate her.

The third important character is Idris, Maram’s fiancé. This probably won’t come as a surprise, but he and Amani get close. Very close. While the romance in this book doesn’t take up the central park of this story, it does get a fair bit of screentime. Unfortunately, I didn’t really care about their budding romance. In fact, my main issue was exactly that it wasn’t budding slowly, it just was there from the start. And as you might know, I. Do. Not. Like. Instalove. Give me tension and show me why these characters fall for each other. Here, we got neither of those. Boo, I say, boo!

After putting some thought to it, I realised that all of my issues with this book (the desire for more world-building, the jumping around from one scene/location to the next, the instalove) relate to the same fact: this book is only 308 pages long. I am aware that debut authors often publish shorter books. Only once they are “established names”, they get to write bigger books. But 308 pages is really short, in my opinion, even for a first novel. I wouldn’t have minded 100 extra pages to give us a more fleshed-out world and more believable love story.

That being said, I loved this book. The setting, the mythology, the characters, the writing,… Daud clearly knows her craft. And I hope the next book(s?) in this series get more pages so we can explore this wonderful world in more detail!

In a star system dominated by the brutal Vathek empire, eighteen-year-old Amani is a dreamer. She dreams of what life was like before the occupation; she dreams of writing poetry like the old-world poems she adores; she dreams of receiving a sign from Dihya that one day, she, too, will have adventure, and travel beyond her isolated moon.

But when adventure comes for Amani, it is not what she expects: she is kidnapped by the regime and taken in secret to the royal palace, where she discovers that she is nearly identical to the cruel half-Vathek Princess Maram. The princess is so hated by her conquered people that she requires a body double, someone to appear in public as Maram, ready to die in her place.

As Amani is forced into her new role, she can’t help but enjoy the palace’s beauty—and her time with the princess’ fiancé, Idris. But the glitter of the royal court belies a world of violence and fear. If Amani ever wishes to see her family again, she must play the princess to perfection...because one wrong move could lead to her death.