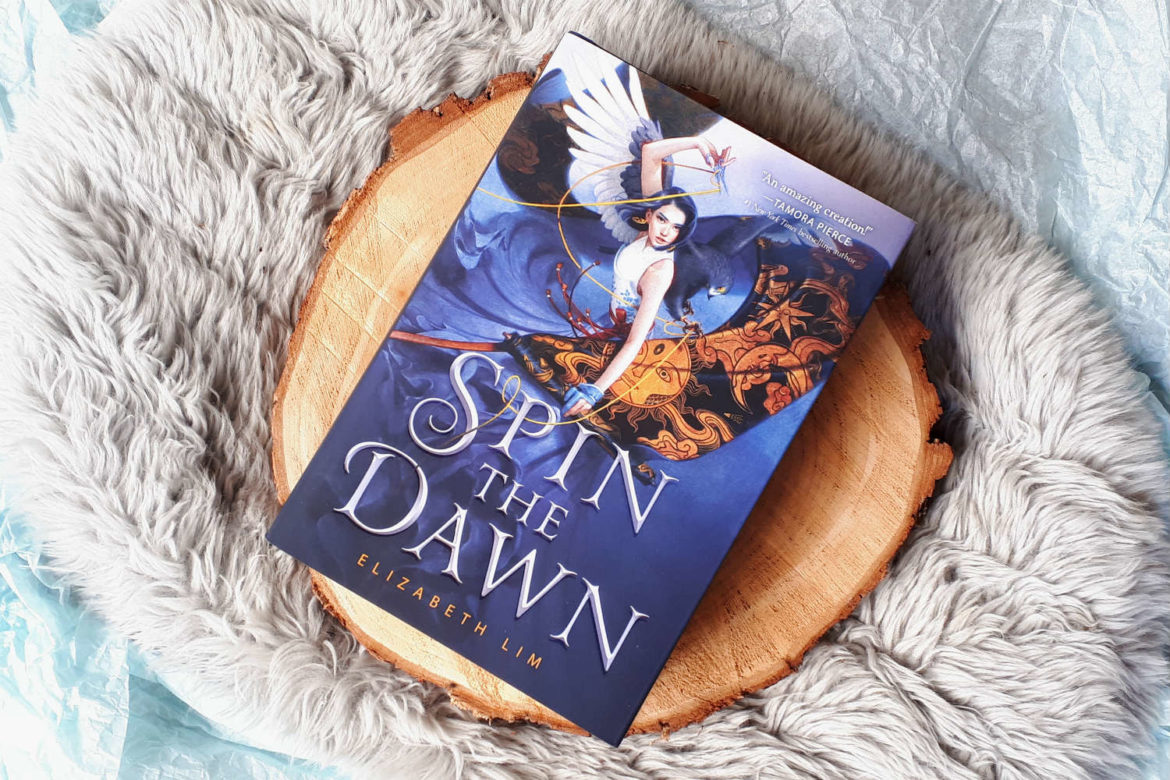 Hi everyone! How are you doing? I’ve finally finished my 4th book of the year, meaning I’m already 2 books behind on my reading challenge. But I have some exciting books waiting for me on my TBR bookshelf, so hopefully I can catch up! For now, let’s talk about one of those 4 books I’ve already read this year. Here’s my review of Spin the Dawn, by Elizabeth Lim.

Maia dreams of becoming the greatest tailor in the land, but as a girl, the best she can hope for is to marry well. When her ailing father, once a famous tailor, is summoned to the imperial palace, Maia poses as a boy and takes his place. Not only does she have to hide her true identity, she’ll also have to compete against 11 other tailors for the job. As if that wasn’t enough, she draws the attention of the court magician, Edan, who seems to see right through her disguise. And nothing could have prepared Maia for the final challenge: to sew three magic gowns for the emperor’s bride, made of the laughter of the sun, tears of the moon, and blood of stars.

Spin the Dawn is described as “Project Runway meets Mulan”. And yes, that is true for the first part of the book. It was fun to read about Maia trying to pose as a boy. The competition itself was also great. I love backstabbing (in books! Not in real life!) and secrets, especially in settings like an imperial palace. And let me tell you, backs will be stabbed in this competition.

She’s going on an adventure

But all too soon, this competition part of the story is over, and Maia embarks on a journey to find the magical items. Here, Spin the Dawn becomes a bit of a typical YA fantasy quest. But don’t get me wrong, it was well executed and I actually enjoyed it a lot. As you might know, journey books tend to be either hit or miss for me. And this one is definitely a hit.

It’s just that the difference between the two parts of this book is so big. In the palace, we meet all these characters, including the emperor, his betrothed, and so on. But then in the second part, it’s mainly just Maia and Edan. This was a bit jarring, I wanted to see more intrigue with the other characters.

Luckily, both Maia and Edan are great characters. I enjoyed their interactions and their chemistry a lot! Their banter was so much fun to read! Maia doesn’t let the patriarchy hold her back in achieving her dreams, and we need heroines like that to show us how it’s done. And Edan… I really liked him as well! He’s cute and sweet and broody, which is exactly how we like our guys in books, right?!

Oh, that ending! Y’all, that finale is amazing! I can’t tell you anything about it because spoilers, but! It sets up the sequel, Unravel the Dusk, to be even more epic and intriguing. I simply can’t wait to get my hands on a copy! WHYYYYYY is July still so far away…?! (Small note of warning: don’t read the synopsis of Unravel the Dusk before reading Spin the Dawn, because it contains massive spoilers)

All things considered, I give Spin the Dawn 4 stars out of 5, although my actual rating is closer to 4.5 stars. It was great, it was fun, but the change between the two parts was too drastic for my tastes.

Project Runway meets Mulan in this sweeping YA fantasy about a young girl who poses as a boy to compete for the role of imperial tailor and embarks on an impossible journey to sew three magic dresses, from the sun, the moon, and the stars.

Maia Tamarin dreams of becoming the greatest tailor in the land, but as a girl, the best she can hope for is to marry well. When a royal messenger summons her ailing father, once a tailor of renown, to court, Maia poses as a boy and takes his place. She knows her life is forfeit if her secret is discovered, but she'll take that risk to achieve her dream and save her family from ruin. There's just one catch: Maia is one of twelve tailors vying for the job.

Backstabbing and lies run rampant as the tailors compete in challenges to prove their artistry and skill. Maia's task is further complicated when she draws the attention of the court magician, Edan, whose piercing eyes seem to see straight through her disguise. And nothing could have prepared her for the final challenge: to sew three magic gowns for the emperor's reluctant bride-to-be, from the laughter of the sun, the tears of the moon, and the blood of stars. With this impossible task before her, she embarks on a journey to the far reaches of the kingdom, seeking the sun, the moon, and the stars, and finding more than she ever could have imagined.

Steeped in Chinese culture, sizzling with forbidden romance, and shimmering with magic, this young adult fantasy is pitch-perfect for fans of Sarah J. Maas or Renée Ahdieh.