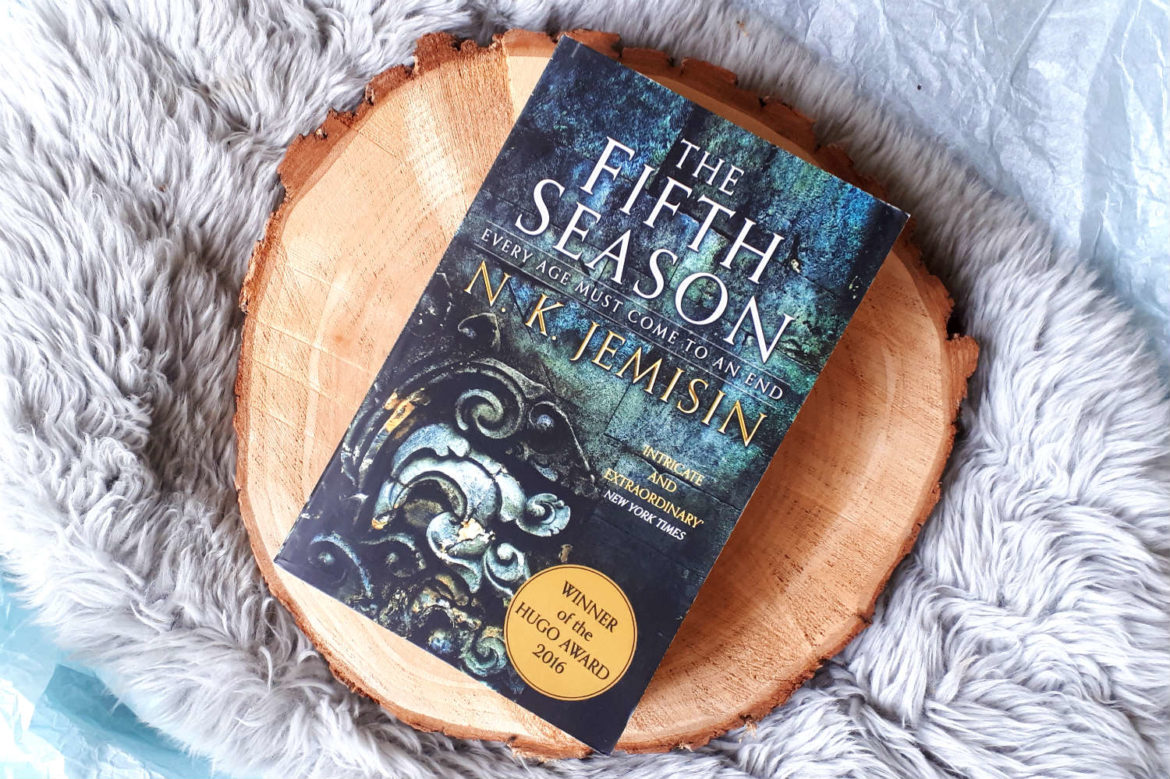 Hi everyone! How’s your week going so far? I’ve been suffering from a reading slump for almost two weeks :/ But last night, I finally picked up my book again, so hopefully that horrible slump is over now! Luckily, I still have a backlog book reviews to publish, so let’s get straight to it. Today, I want to talk/scream/squeal about The Fifth Season, by N.K. Jemisin!

Essun, a woman living an ordinary life in a small town, comes home to find that her husband has brutally murdered their son and kidnapped their daughter. As if that wasn’t bad enough, at the same moment a giant red rift appears across the continent (known as the Stillness), spewing ash to darken the sky for years. Now Essun must pursue what is left of her family across a deadly, dying land, where a fight for survival is coming.

This was absolutely amazing! You might have heard about this series before, because it was nominated for, and won, several literary awards. Notably, all three books in this series won the prestigious Hugo Award for Best Novel, making N.K. Jemisin the laureate three years in a row!

This critical acclaim made me curious about The Fifth Season, while also making me nervous: what if I *didn’t* like it? Which is why this book remained unread on my bookshelf for about a year… Luckily, my fears were quickly wiped away by this stunning book!

Let’s start with the world building. At first, it’s all a bit confusing. There’s mention of orogenes – people who can control earthquakes – and tons of other specific words and concepts. For instance, the Stillness has a history of moments when the continent becomes practically inhabitable. These are known as Fifth Seasons and each comes with its own deadly dangers: fungi wiping out food supplies, water turning acidic, and so on.

This is all a bit much to take in at first. Luckily, there is a lengthy appendix at the end of the book. This provides both historical context for the events and a glossary explaining the important concepts. Just be prepared for a lot of switching between the story and the glossary!

Jemisin created a brutal reality in this book. No happy fun land, but a constant struggle to survive, with dangers lurking behind every rock. This had me on the edge of my seat and kept me awake WAAAAAY past my bedtime.

The story is told through three POVs. First, we have Essun, whose husband murdered their son. There is also Damaya, a small girl who has just discovered she is an orogene and is now sent to the Fulcrum, where people like her are trained. And finally, there’s Syenite, a young woman who has lived at the Fulcrum for many years and is now sent on a mission with a powerful mentor, with whom she is also expected to breed, to conceive a child that she can give to the Fulcrum.

Usually when stories are told through different POVs, I have a favourite one. But not here, oh no! Here I loved all three of them! There were also many amazing side characters: Alabaster, Hua, Tonkee,… I can’t wait to read more about all of them!

The Fifth Season is full of plot twists. And I mean jaw-dropping ones. There was one moment, when a few things (finally?) clicked in my mind, where I just had to stop reading and stare ahead for a couple of minutes. For obvious reasons, I can’t go into detail here. You’ll just have to pick up this book and find out for yourself!

This book explores some heavy topics. The orogenes are oppressed and treated as less-than-human (yet they are expected to work for and save the “regular” people). The Fifth Season provides a harrowing look into systemic racism. No, this book clearly won’t make you feel all happy and giddy. It’s heavy and dark, but it is just So. Bloody. Great.

There is also a lot of diversity in this book, of all different kinds. Many important characters are black. There were also several gay and bisexual characters, and one transgender character who everyone seems to accept without question. There was also a great polyamorous relationship, which was refreshing to read!

I realize this review is getting rather long, so I’ll just wrap things up in one sentence: Go read The Fifth Season, it is one of the best books I’ve ever read and N.K. Jemisin deserves every award she won for this!

A New York Times Notable Book of 2015 Shortlisted for the Hugo, World Fantasy, Nebula, Kitschies, Audie and Locus Awards The inaugural Wired.com book club pick THIS IS THE WAY THE WORLD ENDS . . . FOR THE LAST TIME. IT STARTS WITH THE GREAT RED RIFT across the heart of the world's sole continent, spewing ash that blots out the sun. IT STARTS WITH DEATH, with a murdered son and a missing daughter. IT STARTS WITH BETRAYAL, and long dormant wounds rising up to fester. This is the Stillness, a land long familiar with catastrophe, where the power of the earth is wielded as a weapon. And where there is no mercy.